Underlining the Position of Person who is Incompetent to Contract 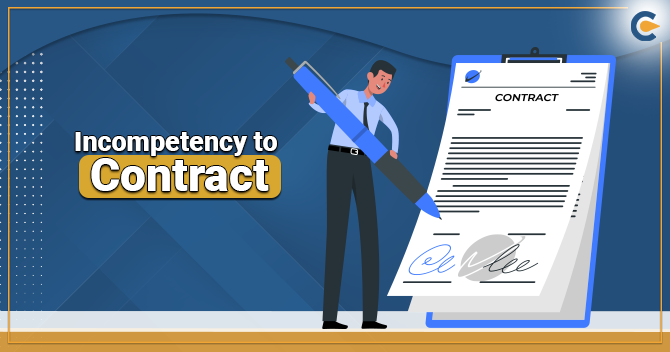 Previously, carrying business activities were not that cumbersome, at least from a legal standpoint. But from the late decades, development has made it difficult for the business enthusiast to start a business or trade, making the Contract a vital part of the businesses. Entering into a contract also plays a vital role for those who want to start a business in association with other individuals or firms. While formulating the terms of the contract, one should be aware of a legal term called Incompetent to Contract. In this write-up, we will discuss this term in brief.

Importance and Foundation of Competent Contract

Contracts are essential as they enclose rights, duties of the parties, and the solutions in case of default. Apparently, before entering into a business contract, one must understand the fundamental of contracts, which are eligible and incompetent to contract.

It’s worth noting that competency is a vital factor that laid the foundation of a contract. The term Incompetent to Contract adheres to utmost importance as far as the contract formation is concerned. In this article, we will unfold the concept of the same in detail.

Fundamentally, a contract is defined as an agreement that is legally enforceable in nature. In order to adhere with the enforceability, the agreement must ensure conformity with the provisions cites under section 10 of the Indian Contract Act, 1872.

Read our article:What are the Important Facts Related To Commercial Lease Agreement?

Which Agreements is Eligible to be Called Valid Contract?

Section 10 of The Indian Contract Act, 1872, mentions that the agreement which meets the following criteria would be deemed as Contract.

It is evident from the list that parties’ competency is one of the critical essentials of the Contract. The Contract will cease to exist if it found that the parties are incompetent to contract.

An individual is regarded as a major when he/she completed the age of 18. It has been cited in Section 3 of the Indian Majority Act, 1875 as, “every Indian national shall attain the age of majority as soon as he/she passes the minimum age limit i.e.18 years.

People serving the age below this limit shall be acknowledged as minor. In our country, minors are not eligible to be a part of the Contract. Any contract that encloses a person below this age limit will stand legally unenforceable.

The agreement that involves a minor will be treated as non-legitimate or invalid. According to Law, a minor cannot be a part of a legal agreement, but he/she can be a beneficiary to one. This provision is included in The Indian Partnership Act, 1932, which states that a person who is not major cannot serve as a partner in the partnership-based company but can reap benefits accrued from it.

In cases where the minor has illegally modulated his/her age and signed a contract, he/she can plead a minority in defense which lets him/her skip the rule of estoppels that become prevalent in such cases.

Contract of a Minor by Guardian

In some scenarios, the minor’s parent can enter into a contract on his/her behalf to serve a specific purpose. However, in such cases, the parent cannot force the minor by the Contract to be a part of a transaction related to immovable property. The position related to the agreement of minor and its effect-

Following individuals are being acknowledged as of the unsound mind, which are as follows:-

The state of lunacy is not permanent; therefore, a Contract signed with lunatics shall not void in a state of healthy mental condition. In case of a contract made regarding the supply of necessities, the Lunatic’s property can be made liable, but he/she will not stand liable for such a contract.

In view of the existing bylaw, the disqualified persons are not eligible to enter into a Contract due to several reasons such as legal, political[1], or corporate status. Following is a list that encloses individuals who are incompetent to contract:-

Now, it is evident from the information above that a contract must stands legally competent to contract. The legally enforceable agreement could not allow a person to be part of it unless he/she satisfied the criteria related to age, mental condition, and legality. A minor or mentally unstable person is incompetent to contract.

Read our article:What are the Pros and Cons of Commercial Lease Agreement in India?

Important clauses under the Sh...

A sales and purchase agreement (SPA) is a document that prepares a legal ground for a transaction to occur between...