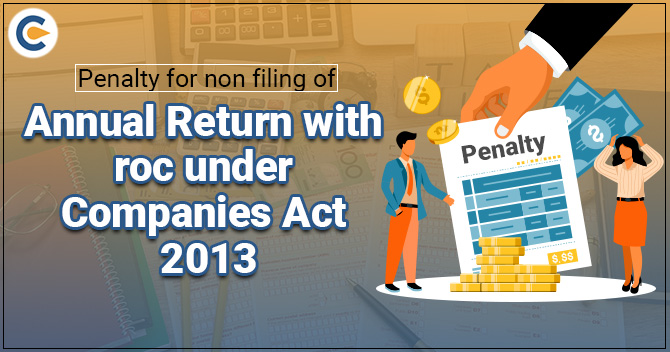 RoC returns refer to an annual return of a company that should be filed in a timely manner with the MCA each year. All companies under MCA are mandated to disclose their financial report with RoC on annual basis. This is similar to income tax return filing with the IT department. According to the Companies Act, 2013, the non-filing of annual returns attracts certain penalties. Therefore, it is compulsory to file the same with sixty days of the AGM and within thirty days for a financial statement. Form AOC 4 & MGT-7 is used to file with MCA within 30 days & 60 days from the date of the company’s AGM respectively. The timely filing of said forms avoids the trouble of being penalized. In this write-up, we would unveil the penal provisions cited under the Companies Act, 2013[1] for non filing of annual return on time.

As a part of the annual filing, entities operating under the Companies Act, 2013 are required to file the given e-forms with RoC:

The section below explains the penal provisions cited under Company Act, 2013 for non filing of annual return via Form MGT-7 and AOC-4

According to Section 92(4) of the Companies Act, 2013 every MCA-regulated entity is required to file annual returns via Form MGT-7 and standard fees with the RoC within sixty days from the holding of the AGM. Failure to file would compel the company to pay a per-day penalty of Rs 100 without any exemption.

Further, the non-filing of such a return would incur penalties for every director administering different affairs in the company.

The said section compels the company and its every serving officer in default to pay a penalty of Rs. 50,000/-. In case of continuing failure, with further penalty amounting to Rs 100/day during which such non-compliance continues, subject to a max penalty of Rs 5,00,000/-

(It’s worth noting that the submission of the said penalties should only be done after receiving the notification from the RoC and the same would be imposed after due adjudication by AO otherwise the standard penalty of Rs 100/day is sufficed.

As per the aforesaid Act, every MCA–regulated entity is liable to file a copy of the financial statements, including financial statement, in addition to the relevant documentation cited under the Act with the RoC within thirty days of the date of AGM in form AOC-4 with standard fees.

Any failure in this context would pose a monetary penalty against the company and its directors. A fine amounting to Rs 1000/day shall be imposed which can go up to Rs 10,00,000.

The company’s MDs and CFO (if any), and an absence of them any other director who has been vested with the obligations to comply with the norms of the section relating to Form AOC-4 and, in absence of such a director rest of the directors are liable to pay a charge of Rs. 1,00,000.

if the said default prevails further, a penalty of Rs. 1000/day shall be imposed which cannot exceed the max threshold of Rs 5,00,000 in total.

Where the company fails to comply with the filing requirement of annual returns for the continuous period of 2 years, the authority may flag such company as “inactive company”. Once that happens, the company’s bank account could cease to exist. Moreover, the RoC can discard the company’s name from the MCA records after rendering an opportunity of being heard.

Non filing of annual return via AOC-4 and MGT-7 for continuous three years would be detrimental for the person serving directorship post. Under such default, they would attenuate their rights of being re-elected as a director in the same company or being appointed as a director in the new company for the next five years. Such a penalty would come to effect from the date of the default.

It is now evident that the timely filing of annual forms enables the companies to avoid penalties as mentioned above and keep their credibility intact in the eye of investors. Ensuring adherence to filling related compliances is not a choice but a legal compulsion. Therefore, non filing of annual returns can prove to be detrimental for companies, from a compliance and goodwill standpoint.

What Exactly “Company to Rep...

The Companies Act, 2013 represents a Charge as an interest or claim formed on the assets or resources of a Corporat...

In recent years, there is an emerging trend for conversion of partnership firm to Limited Liability Partnership (LL...