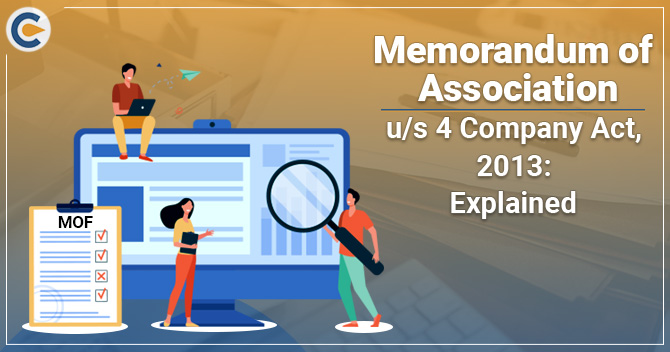 A Memorandum of Association (aka MoA) refers to the organization’s charter. In general, it acts as a legally binding document drafted during the registration process of an organization to specify its association with shareholders, and it defines the objectives for which the organization has been formed. The organization is liable to engage with only those undertakings that are cited in the MOA. As such, these documents underpin an operational framework for the company. This write-up pens down all the detail around memorandum of association under companies act 2013.

Clauses disclosed in the Memorandum of Association (MoA)

Following are the clauses that together constitute the Memorandum of Association of any legally binding company.

This clause defines the company’s name. The company’s name ought not to be similar to any existing entity. The name clause mandates the private company to affix ‘Private Limited’ at the end of their name. The same is also true for the public limited company.

This clause defines the state’s name in which the company’s registered office is situated. This aids to determine the jurisdiction of the RoC, i.e. Registrar of Companies. The company must share such a location with the RoC within 30 days from the company’s date of incorporation.

The clause defines the objective with which the entity is established. The objectives can be divided into the given three subcategories:

Main Objective: It specifies the primary business of the company

Incidental Objective: These objectives serve as an ancillary objective that aid in accomplishing the primary company’s object.

Other objectives:  Any other objects which the organization might pursue and not included in above (a) and (b)

An unlimited company* refers to a type of private company. It bears similar characteristics to a limited company. But the members of such a company have unlimited liability. This indicates that each shareholder is liable for the company’s debts in case of insolvency or winding-up.

This clause defines the max. capital that a company can procure, which is legally known as the authorized/nominal capital of the company. This also defines the division of said capital amount into the no. of shares of a fixed amount each.

The company’s memorandum shall be in standard forms cited in Tables A, B, C, D & E in Schedule I as may be applicable to such an entity.

Any provision cited in the memorandum or articles, in the case of a company limited by guarantee and lacking a share capital, purporting to give any person a right to participate in the divisible profits of the entity otherwise than as a member, shall be void.

Provisions relating to the Alteration of memorandum

A company has right to amend the norms of its memorandum via a special resolution and after adhering to the procedure cited in section 61.

(2) Any change in the company’s name shall attract the provisions of subsections (2) and (3) of section 4 and shall remain ineffective except with the approval of the Central Government in writing:

Provided that no such approval will be imperative where the only modification in the company’s name is the deletion or addition thereto of the term- Private, consequent of any one class of entities in pursuant to the provisions cited under this Act

(3) When any change in the company’s name is made as per sub-section (2), the Registrar shall add the new name in the companies’ register and discard the old name.

After this, Registrar shall issue the new incorporation certificate with the new name, and the change in the name shall be effective on the issuance of such a certificate.

The Alteration of the Registrar in terms of place of registered office’s location from one state to another shall not have any legal effect unless the Central Government in writing authorizes it.

The Central government may not consider the application as per sub-section (4) within a timeline of 60 days and before issuing its order may satisfy itself that the change has the permission of the debenture-holders, creditors, and other individuals concerned with a company or that the company has made the relevant provision either for the discharge of all its debts and duties or the sufficient security has been rendered for such discharge.

Save as available in Section 64, a company shall, on account of any alteration of its memorandum file with the RoC-

The particulars, as may be advised, in respect of such a resolution shall also be promulgated in the newspapers (one in English & one in vernacular language) which is active at the place where the registered office is situated and shall also be placed on the company’s online portal, if any, reflecting therein the reason for such change.

The dissenting shareholders will be facilitated with an opportunity to exit by the shareholders and promoters having control as per the regulations underpinned by the Securities and Exchange Board.

The Registrar shall register any change of the memorandum according to the company’s object and grant the certification within thirty days from the date of filing of the special resolution as per clause (a) of sub-section (6) of this section.

No alteration made under such a section has any legal effect until it has been registered as per the norms of this section.

Creating Memorandum of Association is a legal compulsion for companies that successfully completed the incorporation process. Companies are liable to submit the same within 30 days from the date of incorporation or else penalties would be imposed on the defaulter. Memorandum of association under companies act 2013 is a document that helps companies to underpin business objectives. It prevents them from from performing any activities that is detrimental to the other’s interest in any way.

Read our article:Alteration of Memorandum of Association (MOA) – A complete Step by Step Procedure

An audit is a necessary term used in accounting that examines and verifies a company's financial Information. An au...

What is Lifting of Corporate V...