Shelf Prospectus as per Companies Act, 2013 A shelf prospectus refers to a type of prospectus released by the company making various bond issues for raising funds. It primarily serves as an advertisement, notice, or any other document inviting the masses to subscribe for securities.

The following kinds of entities have the authority to issue a shelf prospectus:

Conditions for issuing a shelf prospectus

Following are the conditions that the company must adhere to for issuing a shelf prospectus:

What is the role of the Information Memorandum?

Changes may occur in the company’s financial position post-filing of the shelf prospectus. These changes ought to be disclosed before the Registrar of Companies (ROC) through the filing of the Information Memorandum in form PAS-2.

The company should file an information Memorandum on the 2nd, 3rd, and 4th of securities made under the shelf prospectus.

1 month prior to the issue.

If the company had procured the money from the general public before changes were incorporated into its financial structure, the applicants ought to be informed of such changes.

Upon receiving this information, the applicants may wish their funds to be refunded. In those scenarios, the company should complete the refunding process in fifteen days.

Shelf prospectus definition and applicability as per Companies Act, 2013

(2) A company filing such a prospectus will be mandated to file an information memorandum enclosing all practical facts w.r.t new changes created, changes in the company’s financial position as have occurred between the initial offer of securities or the erstwhile offer of securities and the succeeding offer of same and such other changes as prescribed, with the Registrar within the given duration, before to the issuance of a second or subsequent offer of securities listed in the shelf prospectus:

Provided that where a company has received an application of securities’ allotment along with the advance payments of subscription prior to the making of any said change, the company shall prompt the changes to such applicants & if they intend to withdraw their application, the company shall refund all the received funds as a subscription within fifteen days thereof.

(3) Where the filing of information memorandum is done, every time an offer of securities is made as per subsection (2), such memorandum in addition to the shelf prospectus shall be considered to be a prospectus

Given the purposes of Section 31, the term “shelf prospectus” refers to a prospectus in respect of which securities are issued for subscription in one or more issues over a certain timeline without the issuance of a further prospectus.

Read our article:Penalty for Non Filing of Annual Return with Roc under Companies Act 2013 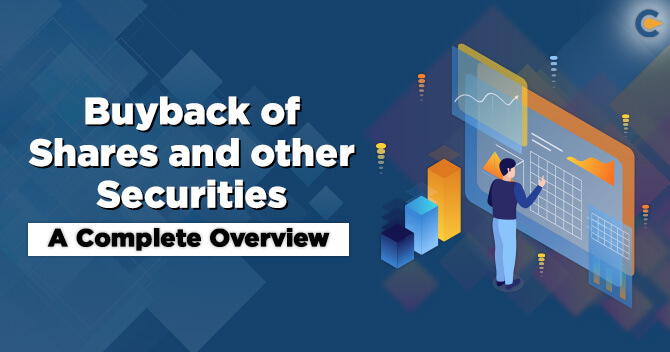 Buyback of Shares and other Securities: A Complete Overview

Under Buyback, there is the repurchase of its existing shares by the Company. To increase the overall value of shar...