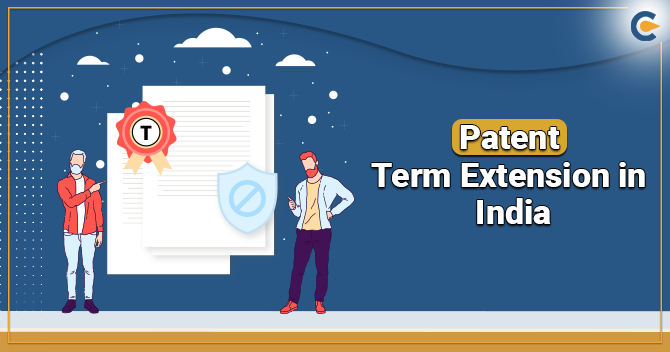 A patent is an intellectual property right exclusively granted to the inventor on patent registration for an invention made by him which is a patentable subject matter, new, non-obvious and capable of industrial application. A sovereign authority has the authority to issue a legal document to the inventor to make, sell and use his invention for a particular number of years with usual term of 20 years. But there is a need for patent term extension to give the inventor more time to use his invention for the purpose of development and growth of invention.

Overview on Extension of Patent Period

This time period can be extended only by following both conventional and constitutional laws that impliedly or expressly provides for the requirement of extension and can extend the term of the patent for not more than 5 years.

Past few years, there is much debate on extension of time period of patent because much of the time of the inventor is delayed during the process of application and examination of approvals from different regulatory authorities.

Patent Term Extension: Why is it Needed?

Major reasons for patent term extension are given below:-

The present timeline of a patent grant was made compulsory by the TRIPS agreement. At present, patent extension time is not permitted in India. Although there are few reasons which can be considered for patent extension and those are as given below:-

In the case of Nitto Denko Corp v. Union of India, it was for the first time proposed by suggestion of the Second Committee appointed under the Government of India for the extension of the patent term on the direction of Hon’ble Delhi High Court[1].

It was also referred to consider compensation to the inventors for the time taken by the regulatory authorities in the examination process and also consider waiving of the maintenance fees or extension of patent term.

The Regional Comprehensive Economic Partnership (RCEP) which is an authority of free trade agreement between the Asia Pacific nations and has 15 signatories. RCEP has reignited the debate about the patent term. It has projected to further extend the existing 20-year patent term for pharmaceuticals.

On considering the above proposal it was noticed that the proposal of patent term is not suitable for India, as here the patent monopoly for 20 years is in itself contemplated as too long because it blocks genuine competition amongst different inventors.

This is particularly considered keeping in mind the advancement of technologies with time and requirement which is going too fast. The RCEP wanted to increase the given time period granted to inventor for patent applications during the evaluation of the particular invention’s novelty in conformity with the needs of patentability.

The following are few general impact of patent term extension:

Few of the criticism on patent term extension are as given below:

The Developed countries look for patent term extension considering that it is essential to recover the costs from research and development (R&D).

The proposers of the patent term extension has the same viewpoint that this time period of extension could add up to the loss caused during the period  of applying for the examination by the regulatory authorities or due to the delays caused by the patent office. However, these arguments are unsustainable.

Moreover, patent term extension can also be one of the major reasons that can result in welfare of the corporate but at the cost of social welfare. Therefore, India being a social welfare eccentric country cannot afford to extend the patent term currently.

Is Your New Idea Patentable? L...

The patentability of an idea is one of the controversial topics faced during the grant of patents. There is a sligh...

A Note on the Patent Protectio...

The Indian drug industry has witnessed huge success in the past few years due to its prompt adoption of evolving te...