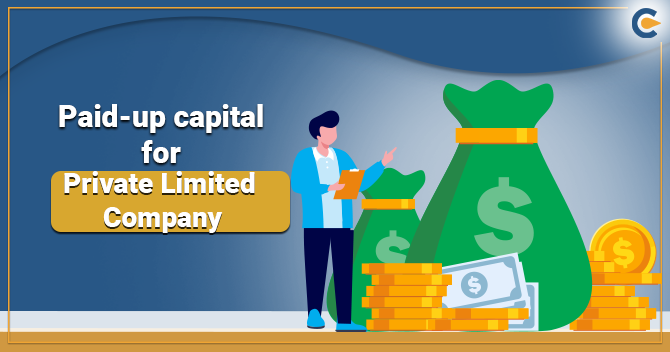 The idea of commencing a new company attracts some fundamental questions such as: which business form is best for the business or how much Paid-up capital is required for company formation under existing bylaws. The startups and entrepreneurs sooner or later have to address these queries while incorporating the company.

Classification of Capital of Registered Entities in India

Lack of knowledge regarding the capital requirement can push any business owner into a state of confusion. If you are dealing with an identical situation then this blog is meant for you. This blog will brief you on everything regarding the classification of capital for the legally registered firm. The capital of a registered entity is classified into three categories mentioned below:-

The Company Act enables the registered company to increase its Authorized capital through a pre-determined procedure. The Authorized capital is deemed as a basic parameter for the estimation of the stamp duty or government fees for any application to be filed by the company. Henceforth, it is recommended not be secure higher authorized capital, as it is alterable.

Read our article:What is Cost of Company Registration in India?

If the promoters of the privately-held company want to issue shares proportionate to the investment’s value in the company, prescribed fees would be imposed by the MCA for increasing the existing authorized capital of the company.

During service life, an entity can procure capital from plenty of sources by the issuance of shares. The shares that are issued to provide for allotment and subscription are regarded as Issued Share capital of the company. The addressee of the said issue, be it person or entity, holds the right to subscribe to the shares.

The subscribed capital is a part of issued capital for which the company’s shareholders have to agree to contribute the amount. The shareholders are only entitled to the unpaid amount of capital on shares owned and subscribed.

The Companies Act has removed the criteria for the procurement of a minimum amount of paid-up capital. That means the registered companies would no longer be required to procure minimum paid-up capital to stay compliant with the Company Act. The promoters are allowed to invest the capital to ensure the seamless running of the company.

Historical aspect of the Paid-up Capital in a Private Company

Previously, there was a compulsion for the private companies to procure a minimum of Rs 10, 00,000 as a paid-up capital. But after analyzing that such a requirement was hindering the individual’s ability to establish a company, the MCA, in 2015, came up with a Companies (AMENDMENT) ACT, 2015 that get rid of this requirement. The step was taken to provide a seamless environment for all the business entities.

It was a welcome change as it allows entities to set up without procuring any minimum capital. It is vital to note that, after this amendment, Sections 2 (68) & 2 (71) continue to preserve the terms minimum paid-up share capital as may be prescribed”. Therefore, the Parliament of India has conferred the government a right to prescribe min. Capital requirements in the future.

At present, about 1.3 million companies were operational in India, out of which more 90% were working as a private limited entities. The amount of capital required to provide resilience to the company depends on the nature of operations and business. The paid-up capital plays a significant role in determining the ability of the company in terms of funding.

Keep in mind that the Companies Amendment Act, 2015 has to get rid of the provision regarding the minimum paid-up capital. However, the rules about authorized share capital still exist. Kindly head over to the CorpBiz helpdesk for any queries related to private limited company registration.

Read our article:Exciting Benefits of Private Company Registration That You Can’t Ignore!

Private Limited and Public Limited Companies are the most popular forms of business in India. Both business forms c...

Concept of Transferability of...

A Private Limited company by definition itself means a privately managed corporation owned by the associated indivi...