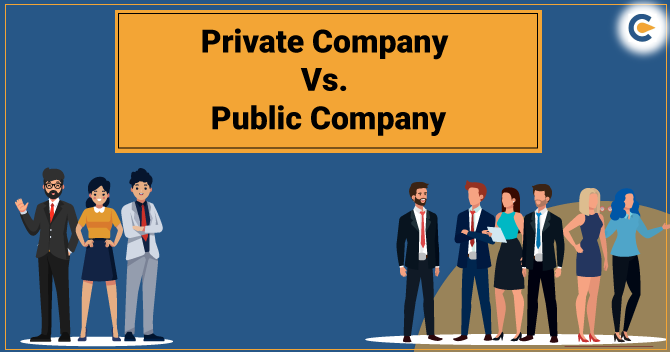 Private Limited and Public Limited Companies are the most popular forms of business in India. Both business forms carry distinctive identities and offer several pros and cons. Thus, an entrepreneur will have to select the company’s type based on the funding plans. This article will unveil all possible detail regarding Private Company Vs Public Company.

As per Companies Act, 2013, the private company is referred to as a business entity that defies the fundamental of the transferability of the shares. It also means that members of the private limited company are not allowed to issue shares and debentures to the general public.

Also, the same act set out the provision on the number of members that can exist in such a business model. As of now, private limited companies are only allowed to retain a maximum of 200 members. Moreover, the privately-held business is liable to include the term “private limited” at the end of their company’s name.

The Companies Act, 2013 defines a ‘public company’ which stick to the limited liability and may offer shares to the “general public” by Initial Public Offer (IPO). An individual can also acquire the shares of such a company where the company is listed via the stock market. A public limited company is often referred to as a joint-stock company. Such a business model is regulated by the provisions of the Indian Companies Act, 2013.

A public limited company can be set up by the group of volunteers (irrespective of their numbers). Unlike private business entities, this business model doesn’t impose any limitation on the transferability of the shares. It means that the company can send an invitation to the general public for the issuance of shares and debentures.

The given section will illustrate the list of grounds that differentiate these business entities:-

Public limited companies usually find their way to the popular stock exchange. Meanwhile, a private limited company, due to regulatory restrictions, doesn’t reap such a benefit.

The Public Limited Company usually raise their funds by issuing an IPO in the general public.  On the contrary, the private company approach to the private investors for the procurement of the funds.

Disclosure of the Financial Report

The public company is liable to manifest its financial reports on a quarterly and annual basis. Meanwhile, the private company is free from such a regulation.

The public limited entities are under the obligation to issue the statement and prospectus on the periodic basis as per the bylaw. However, the private company doesn’t have to address such a requirement.

The notion of transferability of shares is not applicable to private limited companies. Meanwhile, in the public limited company, the shareholders can transfer their share without any legal obligation.

The privately held companies have a limited scope when it comes to the procurement of funds. Meanwhile, the Public Limited Companies are relatively more versatile and profitable on this front. The Public Limited Companies are under the constant pressure of regulatory bodies like SEBI for generating periodic reports and disclosures for the general public.  To serve this purpose, these companies invest a considerable amount of money every year.

Public companies are liable to employ a company secretary. On the other hand, the Pvt. Ltd. company under no obligation to follow such a statutory requirement. However, From 01/04/2020, every listed company, be it public company and private company having a paid-up share capital of INR ten crore or more shall have a whole-time/regular company secretary

The ease of transferring the share is one of the critical reasons for selecting the public limited company. However, that advantage comes with many compromises, mainly in the form of privacy loss and powerful compliances. The transferability of shares is controlled completely in private limited companies, while the shareholders of a public company can transfer their shares without restraint.

A Note on Conversion

A public limited company can turn into a private limited company if they intend to do so. To serve this purpose, the entity needs to purchase the entire outstanding shares from the existing shareholders. As soon as the entity completes such action, it will be delisted from the stock exchange and eventually transform into a Private Limited Company.

The latest finance bill encloses a new clause related to the asset’s value held by private companies. As per the said bill, the entity converted into the private limited company need to maintain the maximum threshold of asset’s value i.e. Rs 5 Cr. in their account book only if the transformation was held three years ago.

After enacting the Company Act, 2013[1], most entrepreneurs rush towards a private limited business model. Since it allows the entities to better exercise better control due to relaxed provisions and less compliance, it has become an obvious choice for most of the start-ups in the country. Also, the incorporation of the private limited companies doesn’t attract any paid-up capital which ultimately helps start-ups to incorporate the business without financial burden. Public limited companies are good at maintaining transparency due to consistent exposure to the general public. Make sure to share your concerns regarding this topic i:e Private Company Vs Public Company through the comment section.

Read our article:Comparison between LLP and Private Limited Company

How to Register a Public Limit...

As per the Companies Act, 2013, a Public Limited Company is a type of company that has limited liability and can o...

What is the Documents Required...

Documentation is an imperative part of every registration process. If you don’t get it right, you might encounter...