Objectives and role of bureau of Energy Efficiency 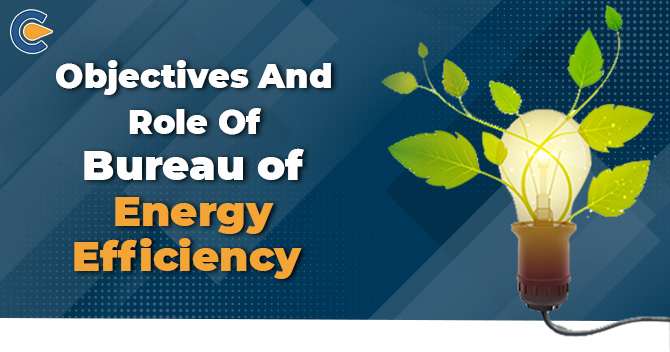 The bureau of Energy Efficiency (BEE) was set up by Government of India on March 1, 2002 and it falls under the provisions of the Energy Conservation Act, 2001. The Bureau has been established with the mission of assistance in the development of strategies and policies falling under the framework of the Energy Conservation Act, 2001[1], with a focus on market principles and self-regulation.

Role of Bureau of Energy Efficiency

BEE undertakes the task of coordination with various organisations, agencies and customers by making an efficient utilisation of infrastructure and resources towards achieving the functions assigned to it under Energy Conservation Act.

The following are among the various functions assigned to Bureau of Energy Efficiency:

The Bureau of Energy Efficiency have been established with effect from 1st March, 2002 vide SO 269(E), dated 1st March, 2002. It is a body corporate by the nature of its existence and is having perpetual succession and a common seal, with following powers subject to the provisions of this Act:

The head office of the Bureau is being located at New Delhi.

The Governing Council engaged in the superintendence, direction and management of the affairs of the Bureau, shall be consisting of not less than 20 (twenty) but not exceeding 26 (twenty six) members which shall be appointed by the Central Government. The Governing Council may exercise all powers and do all acts and things which may be done to achieve the goals and purpose of the Bureau.

The meetings of the Governing Council shall be presided over by the Chairperson. In case the Chairperson is absent, any other member shall be chosen by the members present from amongst themselves at the meeting  who shall preside over the meeting. All the questions  coming up before any meeting of the Governing Council shall be decided upon by a majority vote of the members present and voting, and in the event of equal votes, the Chairperson or in his absence, the person presiding as decided above, shall have a second or casting vote.

The Central Government has appointed a Director-General from amongst persons of ability and standing, who are having the adequate knowledge and experience in dealing with the matters relating to energy production and consumption, supply management and energy conservation, standardisation and efficient use of energy and its conservation.

The ruling term of office of the Director-General is up to five years from the date on which he enters upon his office or until he attains the age of 60 years, whichever is earlier. The Director-General shall be the Chief Executive Authority of the Bureau.

Powers of the Bureau of Energy Efficiency

Obligations of the Bureau

The Bureau shall prepare, in such manner and at a particular time in each financial year, as may be prescribed, its budget for the next financial year, showing its estimated receipts and expenditure and shall forward the same to the Central Government.

The Bureau shall prepare, in such manner and at such particular time in each financial year as may be prescribed, its annual report, giving a full account of all its activities during the previous financial year, and shall submit a copy of the same thereof to the Central Government.

Annual report to be presented before Parliament

The Annual Report shall be laid before the Parliament from time to time as may be caused by the Central Government.

Authentication of orders and decisions of Bureau

Read our Article:Energy Efficiency Standards and Labelling in India

Experienced Legal and Advisory professional with 5+ years of workings in the field of compliance, statutory governance and licensing, RBI, IRDAI matters etc.

How to Apply for BEE Registrat...

In India, making Indian food in Microwave Oven is not possible. Because Indian recipes require lots of masalas to b...

An Overview of BEE Regulations...

The Bureau of Energy Efficiency or BEE published a notification on 25th august 2022 with prior approval of the Cent...