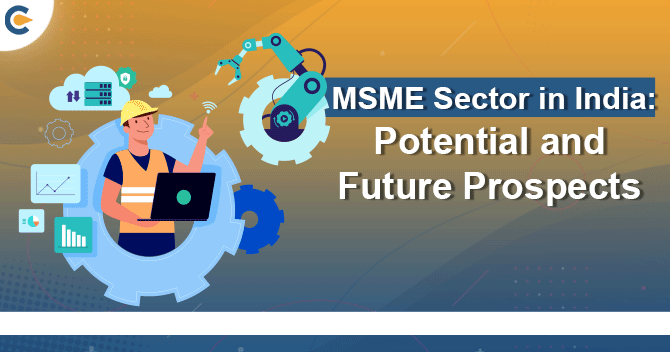 MSME sector is acknowledged as the prominent pillar of the Indian economy owing to their massive contribution to GDP, exports, and job creation. In India, most small and micro enterprises belong to the agro and food sectors. On the contrary, the medium-sized enterprises belong to the pharmaceutical, auto, and chemical sectors. The MSME sector has been working in coordination with several state governments, ministries, and stakeholders to boost Indian’s Rural Economy.

Analyzing the Prowess of MSME sector in India

How is MSME Sector boosting the Indian Economy?

Encouragement of FDIs: The influx of overseas players has poured considerable investment into the MSME sector. This aids MSMEs in adopting better technologies and resources, thereby ensuring improved productivity and competitiveness in the given marketplace.

Technology: The advent of cutting-edge technologies and improved production methods have aided MSMEs in improving their overall supply chain and productivity.

Access to capital: Several credit schemes launched by GOI are backing up MSMEs with adequate financial support to meet productivity needs with ease and maintain a healthy interplay with suppliers.

The government schemes like Credit Linked Capital Subsidy and Credit Guarantee Trust Fund for Micro & Small Enterprises are presently in action and facilitating easy funding without any hassle.

Intending to speed up the growth of the MSME sector in India, GOI has released the following schemes and policies to serve such a purpose.

PMEGP aims at strengthening employment standing in the rural region of the country. For this purpose, the scheme facilitates necessary fiscal aid (within a given threshold of Rs 10 lakh-Rs 25 lakhs) to the upcoming project in rural areas. This will aid in preventing the migration of rural youth to urban areas.

CGTMSE is a joint initiative of SIDBI and MSME ministry. The scheme ensures the availability of collateral-free credit for micro and small industries operating pan India. Access to the said scheme is available to existing and new entities that belong to the MSME sector.

This RBI-driven scheme focuses on deducting interest rates over the new and incremental term loan acquired by MSMEs. As per Interest Subvention Scheme, the relaxation of 2 percent shall be provided to all MSMEs over the said loans.

The government introduced CLCSS two decades back to facilitate Technology Up-gradation to Micro & Small Enterprises. The scheme seeks to render technology up-gradation to SSI units in a particular product category via induction of robust and advanced technologies for which the government extends capital subsidy.

NABARD, a government institution, is assigned as a frontline nodal agency under the scheme for channelizing subsidy via Commercial Banks, RRBs, and Cooperative Banks.

The GOI has also rolled out various policies to boost the MSME sector in India. Key policies include:

Role of Digitalization in the growth of MSME sector

India is most likely to become a 5 trillion Economy by FY 2025, and MSMEs shall play a pivotal role in this regard. To attain this monumental figure, the MSME sector must have an adequate and consistent backup of funds and resources. Needless to say, the government has to play a vital role in this regard by providing necessary aid and scheme to this sector.

The government is making a constant endeavor to incentivize this sector by introducing export-based initiatives and other growth-driven schemes. The sector is yet to achieve its full potential despite witnessing consistent growth in the past few years. This slow surging growth is mainly attributed to dependence on lackluster technologies, reluctance to boost R&D activities, and lack of quality standard certification.

The schemes like ‘AatmaNirbhar Bharat’ have witnessed a considerable push towards boosting home-grown industries via an array of measures such as subsidies, incentives, and fiscal aid. The ultimate objective is to improve the manufacturing & export potential of domestic firms so as to put them at the center stage of global supply chains. An Overview on Digital Lending Under MSMEs

Small businesses can be considered as the backbone of India’s growing economy. There are 50 to 60 million micro s... MSME is known as Micro, Small, and Medium Enterprises which are considered as the greatest asset to the econom...