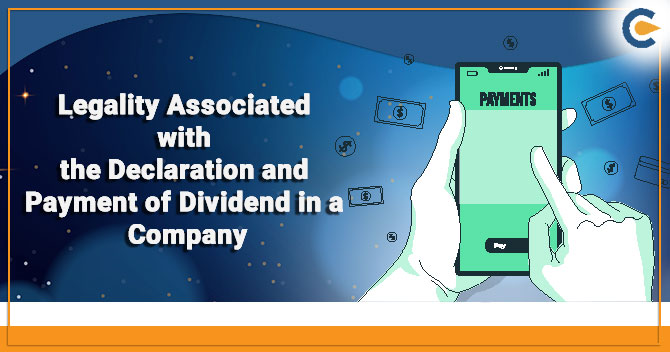 The Dividend is basically a profit that is paid to the Company’s shareholders. It is often paid annually to the shareholder after drafting the final accounts of profit, and the same has to be distributed.

Shareholders’ right on profit as dividends only comes up after the declaration of the Dividend made by the Company after getting approval from BODs. The amount paid relating to Dividend is directly proportional to the amount paid on the Company’s shareholders’ share as per section 51 of the Act.

Declaration of Dividends in Registered Company

Section 123 of the Companies Act 2013[1] has provided some provisions when the companies are allowed to declare or pay dividends in a fiscal year:-

The Company can declare the dividends out of:-

Before making a declaration regarding dividends, the Company has to reserve the required fund to run the day-to-day operation.

Declaration regarding the dividends

If the Company wishes to declare a Dividend depending on the profit collected in the past years, such declaration should be made on the basis of predetermined rules. Board consent is necessary to declare the dividends. The Company can make a declaration regarding dividends only after availing permission from the Board of Directors in the general meetings.

The Company must keep the dividend amount in an independent bank account within five days from the declaration date.

Dividends are usually paid in cash as per the action. The amount of Dividend should be allotted to the legit shareholders only. Such payment mode is opted to necessitate that some of Company’s asset has flown out to the shareholder.

The claimant of the amount has to apply to the Company for payment of Dividend. If the Company fails to pay the said amount in the given period, then it will be relieved of the liability of holding shares or reflecting the same in its shareholder’s list.

The fund also encompasses grants by the government, the monetary contribution made to Company, matured debenture & several other funds as per the Act.

Read our article:All you need to Know about Private Limited Company

A penalty will be invoked if the Company fails to stay compliant with the provision of the Act.

However, no offense under the section shall be considered to have committed:-

Procedure Regarding the Declaration & Payment of Dividend

There must be a legitimate process in place in a company for declaring and paying dividends. The section below illustrates the same.

Notification regarding the meeting of Directors

Under Section 173 of the Act, the matter associated with dividends must be declared in the general meeting attend by BODs. The same must be communicated with the concerned directors.

All the resolutions associated with the dividends have to be collectively examined and passed in board meetings. The resolutions may enclose approving the annual P&L accounts, deciding the final amount of dividends, checking the date of book closure & giving consent to the AGM notice as the same has to be discussed & approved in the Company’s general meeting.

After the resolutions’ approval, the Company must declare dividends as per provisions of section 123. The organizations don’t need to opt for the dividends’ declaration every year, and the BODs hold the rights to declare Dividends. There is no provision under company law that forces the BODs to utilize all their profits by declaring a Dividend.

The Company must open an autonomous bank account for making payment regarding the Dividend. After the declaration, the Company should credit the entire amount to the said account within five days.

The Dividend must be paid to Company’s shareholders in cash within thirty days after the declaration has been made. While doing so, the Company should stay compliant with sections 73 and 74 of the Act.

The Company must transfer the unclaimed dividend amount to the unpaid dividend account as per section 124. After the period of seven years, the said amount must be transferred to Investor Education & Protection Fund if not claimed.

Every type of investment offers a certain level of returns. Dividends can be referred to as a profit that shareholders earn after investing in the Company’s shares. A dividend doesn’t stick to a standard value as it keeps fluctuating based on the Company’s profit. The Company shall decide upon the kind of Dividend to be paid since it is crucial to keeps investors satisfied.

Read our article:A Detailed Outlook on the Roles of Directors and Shareholders in a Company

What Is The Procedure For Comp...

A Private limited company is one of the popular and widely adopted business forms in India. The Company Act 2013 is...