Import License of Drugs and Cosmetics in India 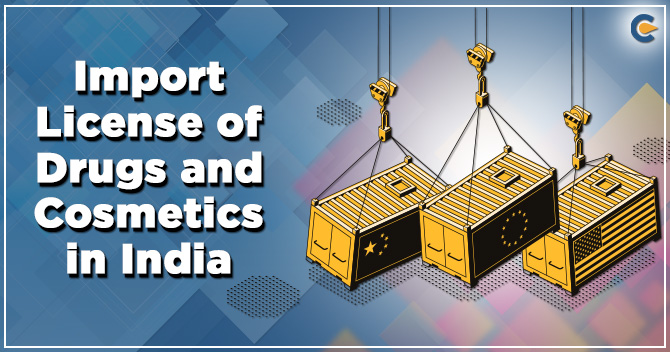 In India, import, manufacturing, sale, and distribution of drug is regulated under Drugs and Cosmetics Act 1940 and Drugs and Cosmetic Rules 1945. Import license is provided for the import of drugs and cosmetics subject to those which are specified in Rule 10 and Rule 10A. In lieu to obtain Grant of Import License, an application for an import license is made in the form and manner prescribed in Rule24. The licensing authority on being satisfied will grant import license. When the conditions of the license will be fulfilled, the issue of an import license will be in Form 10 or Form 10-A. The Import license unless, it is suspended or canceled, must remain valid for a period of three years from the date of its issue.

Procedural Requirements are as follows:-

Requirements for Grant of Import License

As per Rule 25A of the Drugs and Cosmetics Rules 1945, the following conditions must be fulfilled by the applicant

Prohibition on Import of Drugs or Cosmetics

The Drugs and Cosmetics Act 1940 under Section 10 [1] have made restriction on the imports of the following:

Note: This section itself has an exception regarding the import of any drugs in small quantities for the purpose of examination, test or analysis or for personal use with subject to prescribed conditions.

The Central Government, after consultation with the Board, can permit the import of any drug or class of drugs not being of standard quality by making an official notification in the Gazette. This permission would be given subject to any conditions as may be required.

The Central Government can prohibit the import of a drug or cosmetic if the government is satisfied that:

Import of Drugs in India

The Central Government exercises regulatory control over these drugs and cosmetics imported into country through (CDSCO) Central Drugs Standard Control Organisation headed by the (DCG) Drugs Controller General of India.

There are three types of import that are:

Import of the Registered Drugs

Read our article:Take – Off Your Business to International Market with Import and Export Code (IEC); Know IEC Code’s Benefits

Labeling on the Imported Consignment

Import of the Unregistered Drugs

Those are subjected to the following Conditions:

For availability of safe, effective, and quality drugs, medical devices based on the scientific excellence and best possible regulatory practices the imported material under the advance authorization which is unregistered in India is not allowed to be diverted for the domestic consumption within India.

The following penal provisions are applicable on non-compliance with the provision:

Import License of the Schedule-X drugs (Narcotic & Psychotropic drugs) requires some conditions to be fulfilled which are Licensee must have adequate storage facility and applicant must be reputable in the occupation. The license granted must not be suspended or canceled unless the licensee has not been convicted of any offense under the Drugs and Cosmetics Act or Narcotic and Psychotropic Substances Act.

Our Corpbiz group will be at your disposal if you want expert advice on Import License of Drugs and Cosmetics in India. We will help you to ensure complete process as per your anticipated activities, ensuring the successful and well-timed completion of your work.

Process to Set up Export and I...

Commencing a new export and import business can be an intricate undertaking. Start-ups entering into the Exim domai...