Import from China to India: Legalities and Documents 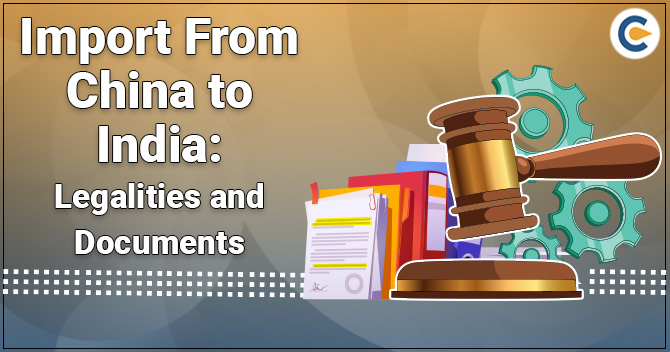 The demand for Chinese products is increasing globally. Every year India imports a massive number of Chinese products either for domestic selling or producing exportable goods. If you plan to serve any of those purposes, you must get familiar with the legal aspects of shipment. This articles pens down underlying legalities and procedures that will help you import from China to India.

Why is it Beneficial to Import from China to India?

Here are some important facts that justify why import from China to India is escalating every passing year:

Key facts and Data Relating to India’s Import from China

How to Import from China to India: Steps, Mandatory Permits, and Documents

Before importing from China, every business must first secure IEC Registration, i.e., Import Export Code, from the Directorate General of Foreign Trade. The IEC refers to a pan-oriented registration that comes with lifetime validity. It is mandatory for both importers and exporters in India. In general, IEC serves the following purposes:

*Connect with a Corpbiz associate to secure IEC in a prompt and hassle-free manner.

Step 2: Ensures adherence to the norms of bylaws

After the IEC allotment, businesses may secure goods from exporting nations that are adherence to Section 11 of the Customs Act, 1962, Foreign Trade Policy, 2015-20, and Foreign Trade (Development & Regulation) Act (1992),

But, certain products- canalized or prohibited, as notified by the GOI- require additional consent and registration form DGFT and the other concerned authorities.

To figure out whether registration is required to import a specific commercial product or service, an importer must classify the product by pinpointing its ITC i.e., Indian Trading Clarification on the Harmonized System of Coding classification.

ITC (HS) is India’s primary method of classifying products for trade and EXIM operations. It is granted by the Directorate General of Foreign Trade.

ITC (HS) refers to an 8-digit alphanumeric code that reflects a particular class of products, which permits the importer to follow norms relating to those products.

Import licenses help clear shipments from customs and come with a validity of 2 years for capital goods and 18 months for raw material, consumables, components, & spare parts.

Step 4: File Bill of Entry and other key documentation for custom clearance

After securing the license for import, the next step is the submit the import declaration in the Bill of entry along with PAN, based on BIN (Business Identification Number), as per Section 46 of the Customs Act (1962).

A Bill of Entry reflects detail about the following

If the goods received the clearance via the Electronic Data Interchange system, no formal bill of entry is filed as it is automatically generated in the system. But, the importer should file a shipment declaration post sharing details required to process the entry for the clearance purpose.

Once the items are imported, the customs officials verify the detail cited in the Bill of entry and cross-check them with imported goods. If there are no errors, the said officials grant a ‘pass out order’ that permits imported items to be replaced from the customs.

GOI imposes basis custom duty on imported items, as prescribed in the schedule of the Customs Tariff Act, 1975[1], in addition with the item-specific duties such as to safeguard duty, anti-dumping duty & social welfare surcharge.

Besides, the GOI imposes an integrated goods and services tax (i.e., IGST) under the GST system. The said rates vary in accordance with the classification of imported items as prescribed in Schedules notified u/s 5 of the IGST Act (2017).

India-china has an old and solid relationship when it comes to international trade. In the past few years, India’s trade from China has increased many folds, and it’s likely to increase further in coming years. This underpins a perfect opportunity for domestic sellers and traders who wish to reap a significant profit margin. The import from China to India is rising, and thus one can leverage this opportunity to set up a profitable business.

Read our Article:How to Start Export Business in India?

How Many Types of Products can...

Import Export Code (IEC) is an alphanumeric 10 digit registration number that is issued by Directorate General of F...