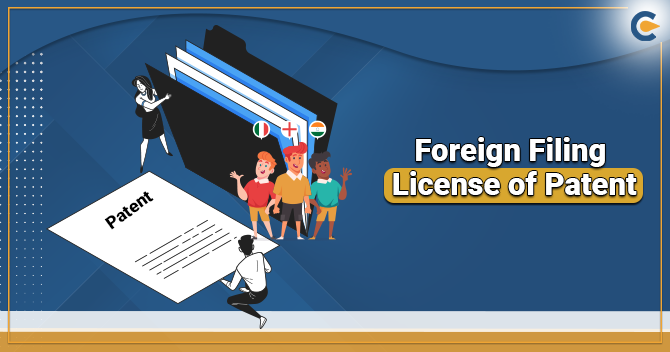 Indian patent law does not allow the applicant to file patent applications outside the Indian Territory unless the same patent application is filed first in India. The Indian Patent Office is the authority to give Foreign Filing License which is obtained through a written permission.

What are the Possible Reasons to Apply for Foreign Filing License Patent?

It is a necessary requirement before filing a request for foreign filing license that a brief description of the invention is given by the applicant in his application. It is important to mention the details because the patent applications that concerns sensitive technologies that could be prejudicial to the defence of India are prohibited for foreign filing license.

What are the Consequences of contravention of Section 39?

In case, an India resident who does not obtain the foreign filing license before filing application in the foreign country then as per Sections 40 and 118 of the Indian Patents Act, 1970 any Indian application that the applicant may file later shall be rejected in addition to that he shall be liable for penalty.

Thus, Section 39 of the Act is very imperative since MNCs have already established many R&D centres in India and there are numerous inventions arising from those R&D centres which shall first be filed in a foreign country.

There are few remedies against the rejection of the Foreign filing License, which are as follows:-

FFL Rejected and No Secrecy Direction Is Imposed

Foreign Filing License is a license obtained due to various required reasons by which the applicant feels the need to apply for patent license outside India. But it is equally important that such filing should conform to the Indian laws and should not be derogatory to the interest of nation.

Considering this, the India Patent office is diligently meeting the twenty-one day deadline to check that the application has fulfilled all the provisions of the Indian statute and thus, only then permits such foreign filing license to the inventor.

Read our article:Procedure for Registration of Patent Agent in India

Is Your New Idea Patentable? L...

The patentability of an idea is one of the controversial topics faced during the grant of patents. There is a sligh...

Conduct a Patent Search in Ind...