Expectations from Government under Union Budget 2021-22 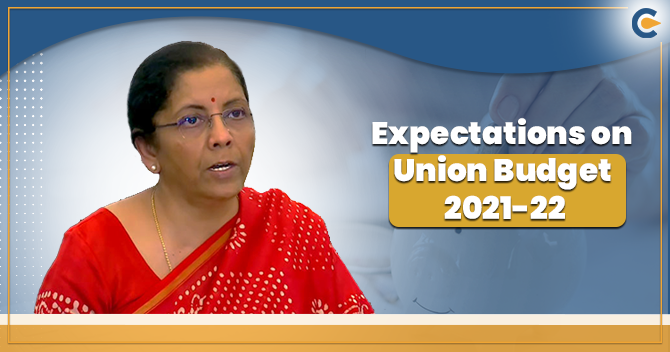 Article 112 of the Indian Constitution deals with the Union Budget, the Finance Minister presenting it on the first day of the month of February every year, so that it can be implemented before the start of the new financial year in April.

In the present scenario, the biggest challenges facing the Indian economy are rising poverty, falling health parameters, worsening educational outcomes, inadequate housing, and widespread unemployment due to the pandemic effect of Covid-19. As India seems to be recovering from the disastrous Covid-19 pandemic, so this time people have high expectation from the Union Budget 2021-22

A few days ago, the Finance Minister promised that the Union Budget 2021-22 would be “never before”, expressing that the government is ready to take the necessary strict steps to boost the devastated economy.

According to information initiated by the Ministry of MSME, India has closed approx 6.8 million MSMEs registered under Udyog Adhaar. MSME-linked traders accounted for 49.81% of total exports made in the entire Financial Year 2019-20 and the region employed 110 million people in India.

Currently, there are an estimated 30 unicorn Indian startups, and 18 out of 30 unicorns are the main foreign direct investment. According to the Commerce Ministry of India, there was a reported $ 73 billion FDI in the entire fiscal year 2019-20.

The biggest concern in this contemporary phase is the contraction in the GDP of the nation. The first advance estimates of growth released signify that the GDP will contract 7.7% in FY 2020-21.

The Finance Minister has quoted that revitalizing development, providing support to pandemic-affected areas and those affected financially in 2020 will be the top priority of the government.

This is a signal that the government will focus on expanding the areas of development, taking adequate measures to fill the gaps left behind by the pandemic effect of Covid 19. Development and recovery may become the main subject of this budget as the government is expected to invest more in local infrastructure, skill development, and manufacturing.

Focus on Agriculture will Boost the Economy

The government has several reasons for focusing on agriculture at this time. Agriculture was one of the few areas that performed strongly during the pandemic.

And with the ongoing farmer movement in New Delhi, the government supposes to send a positive message to the farmers in the country. Therefore, farmer welfare may also be the main subject of union budget 2021-22.

All inflows and outflow of funds within and outside India should be done through rigorous RBI[1] scrutiny, reporting, and limitations. They become a deterrent to foreign investment in India because investors not only have concerns about existing compliance during inflows, but also when returning money in the original investment amount, interest, or dividend. Institutional investors and other investors still have resources at their disposal to make it at least for small investors impacting MSMEs/ Startups.

The overall perspective of the said system of foreign exchange inflows and outflows is necessary to ensure that Indian MSMEs and startups can work smoothly with worldwide customers, suppliers, investors, and other stakeholders and can compete worldwide widely.

The Covid 19 pandemic highlighted gaps in India’s health system, which was devastated by the rapid increase of infection in the country. The corona virus pandemic killed about 1.5 million people in the nation and many of them died because they did not get medical care in time.

The shortage of beds and ventilators during the pandemic-hit 2020 and become the headline of every news. Therefore, this year’s budget is widely expected to focus on improving the country’s health system, particularly in the rural belt.

Many experts have called for an increase in public health expenditure in this year’s budget and an industry position for the healthcare sector. More expenditure is also expected for pharmacy research and disease surveillance in the wake of the pandemic.

Union Budget 2021-22 will focus primarily on growth and recovery, besides strengthening key sectors such as health and agriculture. It is unlikely that the government will provide any benefit on the income tax front amid low revenue collection in 2020.

We believe that the government and its other ministries are working hard to make the Union Budget 20210-22 the best in more than 100 years and lead to a rapid boom in the pandemic-stricken country and economy and the long-run development. This is to make India an economic superpower and a supply chain hub. Kindly assist with the Corpbiz expert to know more about the Union Budget 2021-22.

Read our article: Farm Bill 2020: Is it really Shattering the Belief and Hopes of the Farmers?

India is facing a steep decline in government revenue and an increase in income for at least two quarters as the co...

The following are the latest notifications of WB Authority of Advance Ruling for the applicability of GST rate in V...