Farm Bill 2020: Is it really Shattering the Belief and Hopes of the Farmers? 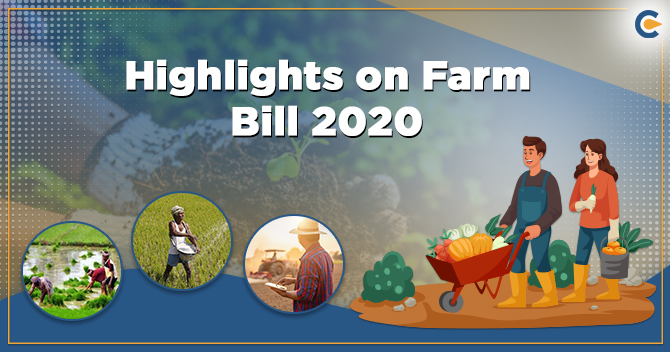 Right now our country is facing is the heat of the farmer’s protest against the three reforms- Farmers (Empowerment and Protection) Agreement on Price Assurance, Farm Services Act, Farmers’ Produce Trade and Commerce (Promotion and Facilitation) Act, and the Essential Commodities (Amendment) Act. These reforms are combinly known as Farm Bill 2020. On 27/Sep/2020, the Indian President gave the green signal to the three farms bills. In this write-up we would look into the ground reality of these reforms.

Understanding the Notion of the Farm Bill 2020

The primary bill i.e. Farmers’ Produce Trade and Commerce (Promotion and Facilitation) Act is meant to get rid of the inter-state barrier; allowing farmers to sell their produce freely in any state. The Act primarily broadens the scope of trading by narrowing the gap between corporate giants and farmers. This significantly improves the financial standing of the farmers. The Farm Bill 202o overcomes the widespread limitation of selling agro produce at one destination by employing an open market system.

The second bill i.e. Farmers (Empowerment and Protection) Agreement on Price Assurance and Farm Services Act intends to overcome the limitation of contact farming by incorporating a national-level framework for the same. With this Act in place, farmers will be able to enter into the contract with private companies, retailers, and processing firms to sell their agro produce at a predetermined price before harvesting.

Why Farm Bill 2020 is widely Protested?

Despite being packed with ample benefits, the Farm bill 2020 has some serious oddities from the farmer’s viewpoint, which are as follow:

This is one of the huge concerns of the farmers as they strongly believe that the Farm bill 2020 would erode the concept of minimum support price (MSP[1]). With the bill allowing more and more corporate to join the agro sector, market monopolization is very much on the card, which eventually narrowed the scope of trading.

Triggers Monopolization of the Private Parties

Farmers are not assured that the bigger companies would maintain the integrity of the contract and could possibly reduce the mutually-agreed price of the contract system. They also fear that the Farm bill 2020 might empower the companies to take control of farmers and dismantle their right to get any support from the Government. This could further translate into the dissolution of the farmer’s rights on account of harvesting or sale price. Moreover, the farmer also believes that the Government would no longer intervene in any matters, including insurance of crops as soon as they enter into contact with the private parties.

The farmers have a strong reason to believe that the Farm bill 2020 will diminish their bargaining power and resources. The Farm bill 2020 may dilute their right to get the best bargain for their produces due to the furious monopolization of the corporate and the absence of the mandi system. At present, there are more than 7500 regulated agro markets in the country functioning under state-level Acts covering a wide category of notified agricultural produce.

An individual working in the post-harvest services is more likely to get affected by the current bill. Some APMC officials claim that these reforms would increase the extent of unemployment in the agriculture sector by removing the self-employed mediators.

Loss of Revenue for the State Government

After abolishing the mandi system, the state government will not be in a position to collect the mandi tax, which acts as a viable source of revenue for them. The farmers of Haryana and Punjab are prominent victims of these reforms. The ongoing protest also includes this agenda, forcing the Government to sort out an amicable solution for the same.

While the Mandy system in our country is submerged in corruption, the farmers have now established a strong bonding with the commission agents. These agents offer credit to the farmers in advance, even in the absence of any security. The agents and traders were collectively opposing these reforms as they feel that the advent of private players will gradually erode this old system and triggers insecurity among them.

Creating Vacuum in the Farming Industry

Most of the farmers in our country face a scarcity of resources in terms of transportation and storage. In the absence of the MSP, they would opt to remain ideal until the market goes up. This may trigger a sense of uncertainty among the farmers, leaving them at the mercy of private players. This could also enforce them to look into other forms of employment, which could possibly create a vacuum in the farming industry.

Farmers also disagreeing with the government’s decision of excluding non-perishable food items from the list of essential commodities as it could lead to unlawful accumulation of these commodities. In addition to that, the prices of these commodities may be skyrocketed by creating artificial scarcity. It is also expected that the government is more likely to open the farm sector for FDI to stimulate growth. The experts believe this would be a massive blow to the economy and increase the rate of unemployment in the agriculture sector.

Farm bill 2020 has been collectively opposed by the farmers because of its obvious discrepancies. Majority of the farmer believes that it and likely to erode their financial standing gradually. However, the Government has a different thought on this, as they strongly believe that this reform will impart more transparency and accelerates the growth of the sector. Therefore, we can conclude by saying that the Government has to come with amicable solutions to fill up the gap.

The (CBIC) Central Board of Indirect Taxes and Customs has permitted the Functionality to file for revocation appli...

On Monday, CBDT took the vital decision in the direction of income tax rule 1962. This time authority makes some ch...