Everything you need to know about Bilateral Netting of Qualified Financial Contracts Bill, 2020 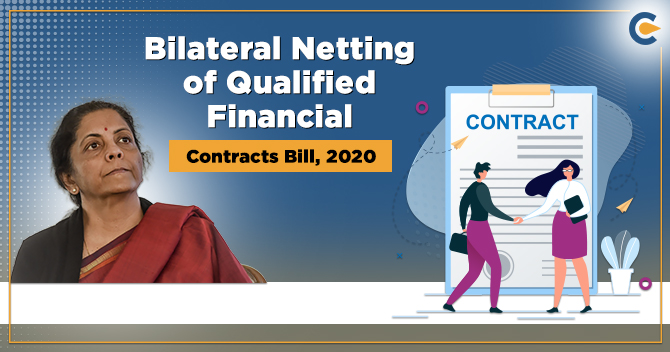 What do you mean by Bilateral Netting?

Bilateral netting refers to offsetting all claims occurring from dealings between two parties to set sum payable or receivable from individual to the other party. The law allows for the enforcement of qualified financial contracts.

The key features of Bilateral Netting of Qualified Financial Contracts Bill, 2020 are as follows-

The appropriate authority may, by notification, designate an entity to be governed by it as a qualified participant to deal with QFCs. It would include Non-Banking Finance Companies (NBFCs), insurance companies, and pension funds. The derivatives markets can facilitate excessive and risks that are not clear, leading to a lot of systemic risks.

Applicability of the Bilateral Netting of Qualified Financial Contracts Bill, 2020,

The terms of the bill will apply to QFCs between two qualified participants, whereby at least one party, an entity, will be regulated by the specified authorities like RBI, SEBI, IRDAI, PFRDA, or the IFSCA.

The Bill provides that netting of QFCs is enforceable if the contract has a netting agreement.

Qualified financial contracts (QFC) states any bilateral contract to be notified as by the relevant authority. The authority can be the RBI,  SEBI, IRDAI, PFRDA, or IFSCA. The Central Government[1] by notification, executes contracts between certain parties or containing specific terms from being designated as QFCs.

It refers to the termination of all obligations arising out of relevant QFCs event of a default. It requires the parties to a QFC to ensure that obligations are replaced by a single net amount enforced during close-out netting. A party may initiate the process to the QFC in the case of:

Administration refers to the moratorium’s imposition, proceedings of winding up, insolvency, or bankruptcy, among others. The administration practitioner is an entity that administers the affairs of the party. The parties to a QFC are required to assure that all duties owed by the one party that is imposed on the other party are required to be returned by a single net amount. The netting will affect converting present and future responsibilities arising from QFCs to which the netting agreement is applicable.

The net amount payable/receivable under the close-out netting would be fixed under the following conditions:-

The insolvent party of a close-out netting agreement is placed under an Administration Practitioner (AP). The Bilateral Netting of Qualified Financial Contracts Bill, 2020 restricts the AP from rendering ineffective cash or collateral transfer despite the imposition of moratorium by any court under any law. If you need to know more about this bill, you can contact our experts at Corpbiz.

The Ministry of Finance has opened the Special Window to States for meeting the GST Compensation Cess shortfall. Un...

Linking Your Aadhaar Card with...

According to the Government rules, the LPG users are eligible to get 12 cylinders only in one year at a subsidised...