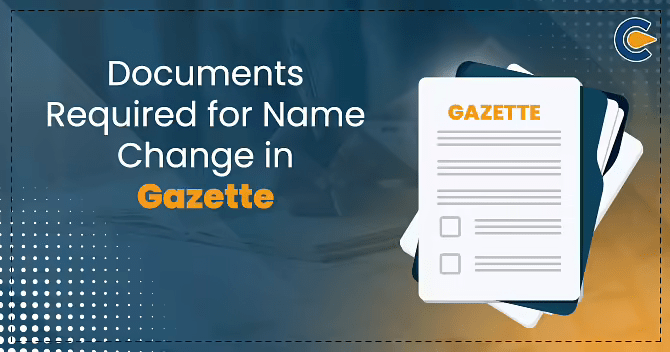 In India, more than everywhere else, changing your name is essentially a routine and uncomplicated operation. The process in India for this purpose is not as difficult as one may anticipate. Such migration may occur for a variety of reasons. Following marriage, women adopt a new last name. Other justifications for performing the same thing include astrology, better appropriateness, shortening long names, and so forth. In this article we will be discussing the documents required for name change in gazette.

Multiple reasons for the name change in Gazette

The following are some basic reasons for Name Change in Gazette.

Procedure for Name Change in Gazette

There are various reasons for changing the name; the following is the procedure required for the name change in Gazette.

So if you want to publish your name change in the Gazette, the applicant can approach the office of the controller of publication, your name in the state gazette.

After reading this article, it can be concluded that there are various reasons for the name, and it has been discussed elaborative. However, three basic steps need to be follow for the name change. And all the important documents required to be submitted for have been mentioned above.

Read our Article:Know the List of Documents Required for Payment Banks License

Every company which is registered under the Companies Act, 2013, is required to attach director’s report with fin...

Condonation of Delay under Dif...

Condonation of delay is primarily applied for the deferred applications or suits in honorable courts in India. It i...