Do You Know About Income Tax for NRI in India: 10 Minutes Read 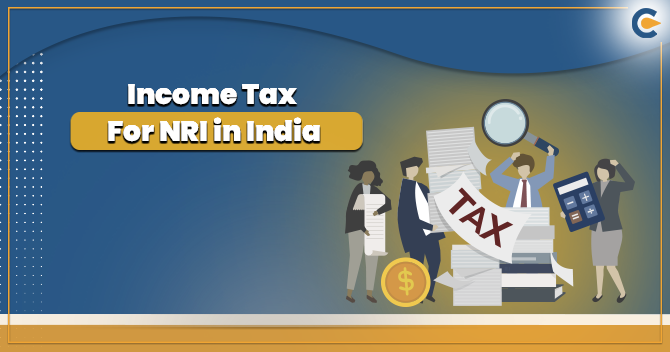 The Indian economy moves with the help of tax. The tax collected from the citizen is used to build roads, hospitals, school and to provide other amenities to the general public. It is the core foundation of the Indian economy eventually. The tax collected from resident or non- resident it doesn’t make any difference to its end-use. Today, in this article we will throw some light on the Income-tax for NRI. To know about Income tax for NRI first we need to check the residential status of the person whether it comes in resident or non- resident.

How to Check the Residential Status?

In end of the financial year (FY), the term NRI involved the persons who stayed within India’s territory for 182 days (or less) in any financial year. In March 2020, the Government of India introduced certain amendments.

If you are an NRI visiting India, your residency status will change by fulfilling the below-mentioned criteria.

Let’s understand the concept of the Resident But Not Ordinarily Resident (RNOR) Status.

A person has visited India frequently in the first four years of the current financial year of your recent visit. If the total number of days is 365 (more than four years), he will be treated as a resident Indian for income tax purposes. The residency status of that person will then become a resident but not a resident (RNOR).

What Incomes are Included in the NRI’s Income?

Once the person has proved his residential status, he is required to calculate his taxable income. If his total gross income is more than INR 2.5 lakh in a financial year, he will be liable to pay tax.

The below discussed are the categories of taxable income

Also, Read: How to Calculate Income Tax For Salaried Individual

Yes, Resident or non- Resident of India, any individual whose income exceeds Rs 2, 50,000 required to file its income tax return in India.
The last date to file an Income tax return in India is 31st July for Non- Resident of India. In case, the tax liability exceeds Rs 10,000 in a financial year then the person is required to pay the advance tax. Furthermore, the interest under section 234B and section 234C is applicable when the person doesn’t pay the advance tax. File your Income-tax return now!

What is Taxable Income for an NRI?

The taxable income is income that a person earned by the way of salary, profit or other income. The salary you receive in Indian or by any other person on your behalf is taxable in India. Therefore, in the case of NRIs, the person receives the salary directly into an India account then it will be subject to Indian tax laws. The Income-tax is taxed according to the slab rate the person belongs to.

The income earned from salary is considered as taxable if the services are rendered in India. So, in case you are an NRI and your salary is paid towards the service provided by you in India then it shall be taxed in India irrespective of the factor where you are getting the income.
Furthermore, in case your employer is Government of India and the person is a citizen of India rendering service outside India is also taxed in India. The income of Diplomats and ambassadors are exempted from tax.

For example- Mr. Rohan was working in Canada on a project from an Indian company for a period of 5 years. Rohan needed the salary in India to take care of the needs of his family and make payments towards a housing loan. However, since salary received by Rohan in India would have been taxed according to the Indian laws but rohan decided to receive it in china.

Income earned from a house property situated in India comes under the category of income tax for NRI. The calculation of the income shall be in the same manner as it for the resident. The property could be rented or lying vacant. An NRI is allowed to claim the deduction of 30%, or can deduct property taxes and can also avail the benefits of an interest deduction if there is a loan taken for home. The Non-Resident of India has also allowed having a deduction for the principal repayment under section 80C.

In addition to that, any stamp duty and registration charges paid at the time of purchase of a property can also be claimed under section 80C. Income from house property is taxed according to the income tax slab rates.

Let’s understand this with an example-

Sunita own house property in Chandigarh and has rented it out the property while she lives in Thailand. She has directed the tenant to make rent payments to be received directly in her bank account in Bangkok. Sunita’s income from this house which is in India shall be taxable in India.

A tenant that lives in NRIs house and paid rent to the NRIs owner shall remember to deduct TDS at 30%. The Income can be transferred to Indian account or the NRIs account where he is currently residing. This rental income of NRI raises the liability of Income-tax for NRI.
For example- jiya pays a monthly rent of Rs 30,000 to her NRI landlord. She is obliged to deduct tax at 30% for TDS or Rs 9000 before transferring the money to the landlord’s account. Jiya must also get a form 15CA prepared and timely submit to the Income-tax department online. Any person making remittance to a Non- resident India needs to submit Form 15CA online that is duly certified by the Chartered accountant detailing the exact payment, DTAA if applicable, TDS Rate and TDS deduction as per the Income act under section 195[1].

When Form 15CA is not required-

What are The Special Provisions Related to Investment Income?

Whenever the NRI invests in any kind of Indian assets then he is taxed at 20%. If the special investment income is the only source of income then the income earned by the NI during the financial year, where TDS has been deducted then such NRIs are not required to file an income tax return.

What are The Special Investment Vehicles That Qualify the Special Treatment?

The following are the special investment vehicles that are derived from the following Indian assets acquired in foreign currency:

There is no deduction allowed under section 80 while calculating investment income.

The long-term capital gains made from selling or transfer of the foreign assets then under Section 80 there is no advantage of indexation and deductions are not allowed. But under Section 115 F exemption on the profit can be availed when the profit is again reinvested back in to:

In the given above case, if the new asset cost is less than net consideration then the capital gains are exempted proportionately. The above benefit may be obtainable to the NRI even when they become a resident and until those asset is converted to money. Also they can obtain the benefit on submitting a declaration for the special provision application to the Assessing officer.

Read our article:Income From Other Sources- Do You Also Have?

In the growing world of digitalisation and interlinking of data from various sources, the government is keeping a k...

Is it Mandatory to File ITR be...