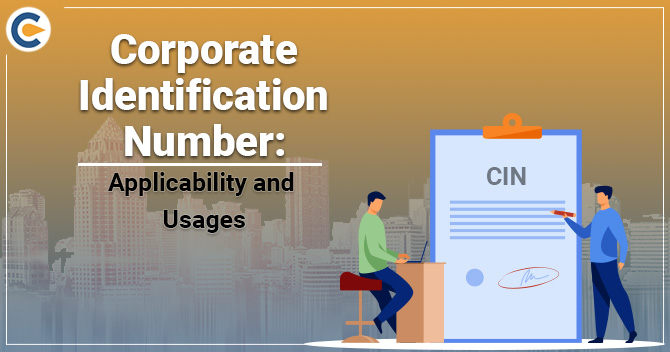 A Corporate Identification Number, aka CIN, refers to a unique identification number granted by the RoC, i.e. Registrar of Companies, to the registered companies in India. The Registrar of Companies issues the CIN to the companies while conferring their registration certificate. The CIN serves a company’s identity, and it is mentioned in various forms to be furnished to the MCA, i.e. Ministry of Corporate Affairs, especially in reports and audits.

What is a Corporate Identification Number (CIN)?

Corporate Identification Number is a 21 digits alpha-numeric code granted to the entities incorporated within the nation registered by the ROC of the respective states under MCA.

CIN is generally granted to the following entities in India

But, CIN is not accessible to the business structure like LLP in India. The RoC issues the Limited Liability Partnership Identification Number (LLPIN) that serves as a unique 7-digit identification number for such companies.

CIN is used to monitor all aspects and activities of an entity from its incorporation by the Registrar of Companies and must be furnished on all the transactions with the respective ROC.

The 21 digit CIN helps determine the company’s basic information listed in the MCA’s database. As a unique number, the CIN can aid in locating or tracking registered entities’ information for various levels that MCA/RoC holds. The CIN entails the organization’s identity and additional details relating to the registered company under the ROC.

Common abbreviations used in section-5 of the CIN include;

Every company that is incorporated in India requires to quote its CIN on the following documents:

Penal provisions underpinned by MCA for not citing CIN

The penalty amounts to Rs 1000/day shall be imposed on the company and the officers committing default in pursuant to the above requirements. The maximum penalty in this context has been limited to Rs 100000.

Events under which changes to CIN become a mandate

Following are the events under which companies are mandated to incorporate changes to CIN;

The Ministry of corporate affairs[1] usually grants CIN soon after completing the incorporation process. It comes with the incorporation certificate and serves as the legit identification source. If you need some professional help or services regarding the Corporate Identification Number, aka CIN, then feel free to prompt us without any second thought.

Read our article:How to validate the Company Registration Number?

How to validate the Company Re...

“How authentic is a Company” is one of the most obvious questions among individuals when they are availing any...