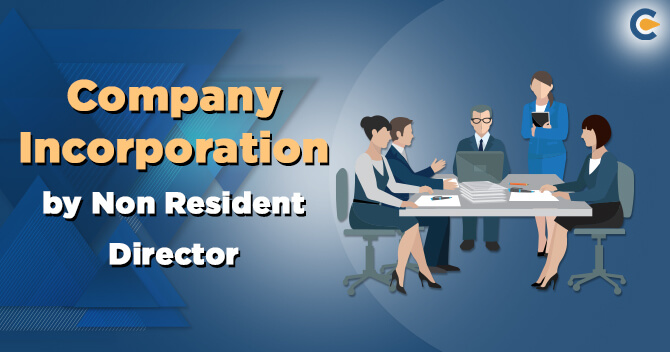 In the eyes of law, company is an artificial person who has a separate legal entity from its members. It is the responsibility of the directors of the company to manage and control the affairs of the company. As per the Companies Act, 2013[1], there is no restriction on Company Incorporation by a Non-Resident Director provided that amongst all one of the directors must be an Indian. The foreign director can be an executive or non-executive director.

Non-Resident Director under the Companies Act, 2013 – An Overview

As per the Companies Act, 2013, it does not bar non-residents from becoming directors in the Indian Company. A foreigner Director can be appointed as Whole-time Director, Independent Director, Additional Director, Alternative and Nominee Director.

The appointment of Directors, including the Non-Resident directors, are governed under section 152 of the Companies Act 2013. The Non-Resident Director needs to fulfil the following conditions and possesses the requisite documents to appointed as a director in the company.

Requisites for appointment as a Non-Resident Director

Before the appointment, a Non -Resident Director is required to fulfil the following requirements-

Note: All the documents are required to be notarized by the Public Notary and also apostilled by the authority of the Respective Country where the Non-Resident resides.

Additionally, the documents can also be certified by the Managing Director, CEO or Company Secretary of the Indian Company, where the Non-Resident is already a Director.

In the case of Indian Origin Card of a Non-Resident applicant or having Overseas Citizen of India Card, the documents can only be attested by the Gazetted Officer in India.

The procedure of Company Incorporation by Non-Resident

As per the Companies Act, 2013 For Company Incorporation by Non-Resident Director, Below-mentioned procedure is required to be followed-

At the time of Company Incorporation, every applicant, including the Non-resident, shall be allotted with the DIN. DIN Application shall be made in electronic form DIR-3 to the Central Government.

What documents are required for DIN Application in case of Non -Resident Director?

DIN shall be filed and signed by the applicant (Including Non-Resident) using his/her Digital Signature Certificate. DIN shall be valid until the lifetime of an applicant

For any query related to the appointment or related services, contact Corpbiz, our team of professionals will assist you by providing proper guidance and in the execution of compliances.

Priyanka Bajpayee has done Masters in International Business Law and well versed in content writing covering the area of legal and finance. Also, she has practical experience of almost 1.5 years in Legal compliance and secretarial work.

A Private Limited Company is a type of entity in India which holds many advantages over any other form of existence...

How to validate the Company Re...

“How authentic is a Company” is one of the most obvious questions among individuals when they are availing any...