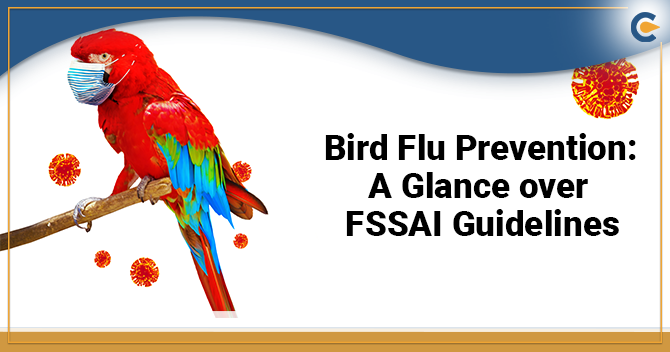 Ever since FSSAI has come into existence, the awareness level of people regarding food safety and viruses outbursts has reached a newer height. People nowadays have more clarity on what to do and what to avoid while confronting deadly viruses that are originated from food items. Confrontation with seasonal and new viruses is not new for people of this country, especially after the covid-19 phase. Presently, a few states of India is confronting the bird flu virus and most people are unaware of how to retaliate against this situation. In view of this, the premier food regulator of India FSSAI has rolled out guidelines for bird flu prevention. While promulgating the guidelines, the authority has urged the general public to keep their calm and follow their guidelines to the fullest. In this write-up, we shall brief out the said guidelines that revolve around the Bird flu prevention.

An Overview on the Bird Flu outbreak in India

The Indian government has confirmed that the bird flu outbreak in poultry birds in 6 states, including MP, Maharashtra, Haryana, Kerala, Punjab, and Chhattisgarh[1]. Bird Flu (aka Avian influenza) is an infection triggered by the avian influenza viruses.

This natural-occurring virus is highly contagious in birds & can make birds very ill and even endanger their lives. Most strains of bird flu are primarily found in the gastrointestinal & respiratory tracts of the infected birds.  Since this virus is pathogenic, it spreads to all parts of an infected bird.

With proper cooking, bacteria inside the egg and meat can be inactivated. It is recommended to avoid consuming poultry produce from areas with outbreaks in poultry.  According to FSSAI, properly cooked poultry products are less likely to sustain bacterial infections of any kind.

Not consuming half-boiled or cooked poultry produce is the best measure for bird flu prevention.

FSSAI is a government-backed avenue that handles and regulates food-related matters in India. Its key objective is to minimize the malpractices in the food sector so that the end-user can have access to safe and hygienic foods.

FSSAI guidelines have been promulgated in relation to the following

Let’s unfold each point one by one

Measures to be taken at meat outlets

People who handle raw meat must wear PPT described above kits and disinfect themselves via frequent washing before & post handling of poultry produce. Also, they are directed to avoid bird droppings.

Read our article:Renew FSSAI License – When and How to Do it!

Precautions to be taken by End-users-

World Health Organization has appealed to masses to bring safe and hygienic practices into effect before cooking the poultry produce.

The cases of bird flu outbreaks have also been linked to the handling of dead birds before cooking. Cases of person to person transmission of the Avian influenza virus is almost negligible unless one works in close proximity of the infected birds.

According to Food and Agriculture Organization, one of the viable ways of lowering the infection risk is by excluding birds from the food chains. It includes the sourcing of products from reliable and legitimate suppliers.

Precautions for handling & cooking poultry produce such as meat and eggs

FSSAI has laid down certain Dos and Don’ts in relation to the Bird flu outbreak.

Even though bird flu is not as deadly as other viruses, it could jeopardize the lives of those who lack good immunity or suffering from other diseases. Therefore, it’s a good idea to stay in line with the above guidelines to avoid any confrontation with such a virus. The role that FSSAI is playing in this regard is nothing short of exceptional. This institution is taking every possible measure to minimize the spread and impact of this virus.

Read our article:How to Get FSSAI License in India: Full Guide

FoSCoS for FSSAI License in In...

The initiation of FoSCoS for FSSAI license in India will serve all the food business operators with FSSAI licenses...

Food Processing Industry in In...

In the last decade, the food processing industry in India has beheld a rise of around 11%. The rapid growth of food...