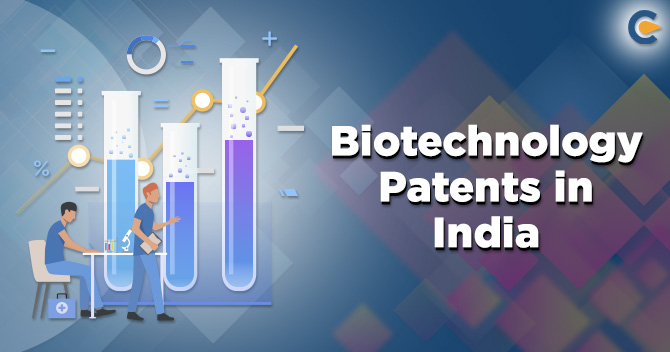 What are Biotechnology Patents in India?

Biotechnology inventions are a broad area of biology involving living organisms and systems to make or develop products, or any other technological application that uses living organisms, biological systems, or derivatives thereof, to modify or make products or processes for specific uses.

The man behind the first Patent Act Thomas Jefferson does not have any idea that life forms can also become a subject matter for protection under Patent. In the case of Diamond v Anand Chakrabarty, a biochemist at General Electric (GE) developed a genetically modified organism that had the capability to decompose crude oil. Initially, the Patent application of the inventor was rejected. But later on, a further appeal was made which and the Patent was granted by the court to the inventor with an order stating that the claim of the inventor is not to a hitherto unknown natural phenomenon, but a non-naturally occurring composition or manufacture of matter-a product of human inventiveness”.

What is the history of the Biotechnology Patents in India?

In India, the Patent Act was enacted in the year 1856. Since then, the Patent Act was modified and amended several times. In the year 1970, one major amendment came into being which satisfied the international norms of patentability of an invention covering novelty, industrial application, and inventive step. But the amended version of the Patent Act, 1970[1], does not include anything specific concerning the invention related to Biotechnology and the protection of such Biotechnology inventions.

What are the provisions related to Biotechnology Patents in India?

The sections of the Patents Act, 1970 (Act) which are emphasized for the examination of applications related to Biotechnology Patents in India and related fields are as follows:

What are the basic requisites for obtaining a Biotechnology Patents in India?

The basic requisites for obtaining a Biotechnology Patents in India are as follows:

The excluded subject matter are as follows:

It is essential to be proven that the invention of the inventor can be made, can be used in at least one field of activity and can be reproduced with the identical characteristics as many times as required for an invention to be industrially applicable in India. Since, the Patent Act, 1970, does not provide for any specific mention regarding the industrial applicability of Biotechnology Patents in India, it is reasonable to apply the general standards of industrial applicability to the inventions related to Biotechnology.

If any biotechnology inventions can be made and used in an industry and can also be reproduced as many times as required, such inventions hence, satisfy the Industrial Applicability requirements in India. The guidelines in the Manual of Patent Practise and Procedure provides for examining biotechnology. The guidelines are related to gene sequences and DNA sequences, that provides if the functions these sequences are not disclosed, such sequences do not satisfy the Industrial Applicability requirement for Biotechnology Patent in India.

The Patents Act,1970, does not have any clear provisions in regard to the novelty of Biotechnology inventions in India. Most of the inventions related to biotechnology are products or goods of nature inherently present in the living organisms; hence, such products or goods can be interpreted as discoveries and are not patentable as per the Patent Laws of India. Though, the Manual of Patent Practice and Procedure provides that some biological substances such as Plasmids, recombinant DNA, and processes of manufacturing these substances are eligible for being patentable in India, provided that such substances are produced by substantive intervention of humans.

The Manual of Patent Office Practice and Procedures as set out certain guidelines for assessment of Inventive Step of inventions in Chapter 8, Para 08.03.03. An invention of the inventor should hold an inventive step so as to be eligible for the protection of Patent in India.

As per the Patents Act, 1970, an invention will have an inventive step if the invention involves the following:

And the things as mentioned above must make the invention not-obvious to a person skilled in the same art.

As per the Manual of Patent Office Practice and Procedure, it can be securely determined that isolated protein sequences and gene sequences will be considered to involve an inventive step considering their naturally existing counterparts.

Furthermore, the requirement of economic significance is comparatively easy to prove for inventions related to Biotechnology due to their several applications in diagnostics and drugs sector. Principles such as predictability of the field, reasonable expectation of success, and so on are applied to determine an inventive step in India as well and would also be applied to inventions related to Biotechnology. However, it is clear that the current Patent law does not provide for any differing standards for biotechnology inventions when compared to other inventions in India.

Furthermore, the Manual of Patent Office Practise and Procedure, provides that the procedures for cloning of human beings or animals, procedures for modifying the germline, uses of human or animal embryos, genetic identity of human beings or animals, for any purpose are not to get patented in India as such inventions are against the public order and morality. The Patent Law of India has sturdy prohibitions against granting Biotechnology Patents for inventions based on morality and public order.

What is not Patentable under Biotechnology Patents in India?

The followings things are not patentable under Biotechnology Patents in India:

In the modern period, patenting of Biotechnology inventions is a significant aspect because of its investment and research-intensive nature. The recent case laws nowadays, clearly infer that the biological materials or substances which are designed in labs and were earlier not available in the natural environment have earned some right of patentability. Hence, for the protection of the inventor’s interest and rights of patentability, the Biotechnology Patents in India was introduced. The process for filing for the grant of the Biotechnology Patents in India is lengthy and long-lasting. We at Corpbiz have skillful experts to guide you with the process of filing for Patent Registration in India. Our experts will help and assist you throughout the Patent registration process. Our experts will ensure the timely and successful completion of your work.

Read our article:Computer Related Inventions in India: A Complete Overview

Under the copyright laws, protection is accessible only to the expression of an idea& not the idea per se. The...

How to Structure a Trademark C...

When we talk about protection of laws related to copyright in India, they are pretty vague. There are a lot of defe...