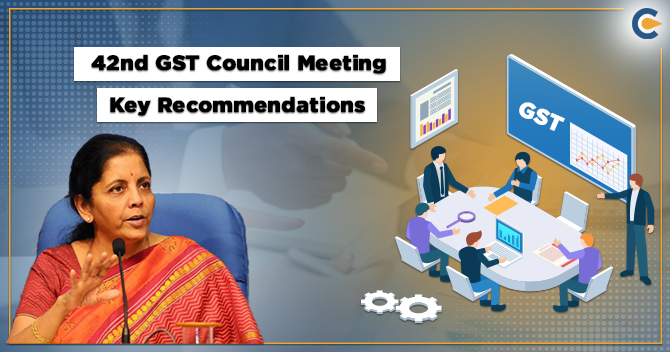 The 42nd GST Council meeting held under the supervision of honorable finance minister Smt Nirmala Sitharaman via video conferencing. The other attendances in the meeting were Union Minister of State for Finance & Corporate Affairs Shri Anurag Thakur and other officers of States/UT and ministry of finance.

Read our article:GST Can’t be Imposed on Services Provided By Court Receiver

Recommendations that were drawn in the 42nd GST Council Meeting

About six months ago, the council suggested a gradual approach to deploy features of the new return system in the existing GSTR-1/3B scheme. Since then, various changes have been incorporated on the Goods and services tax common portal.

To improve the compliance experience, the council has approved an entirely new framework to reduce the taxpayer’s burden in the above context. The framework would be capable of generating timely reports related to ITC which will be reflected on the taxpayer’s electronic credit ledger. Apart from that, the council also made the following decisions:-

The 42nd GST Council meeting has paved a roadmap for the small taxpayers as far as the tax liabilities are concerned. Such taxpayers now have an option to pay thirty percent of tax liability of the preceding quarter via an automatically generated challan. The taxpayers having a yearly turnover of fewer than five crores are permitted for quarterly filing of the return via monthly payments, which will become effective from Jan 1, 2020.

In the Budget Presented on 01st February 2020, there were many changes proposed in Income Tax and GST. As compared...

GST was implemented from 1st July 2017, but there are still many topics that need further clarification. One of the...