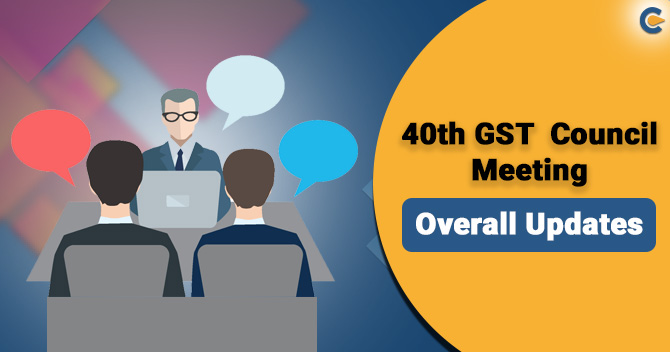 For the first time after the nationwide lockdown, the 40th GST Council Meeting was chaired by Finance Minister NirmalaSitharamanover and done with video conferencing. The discussion was on GST compensation, inverted tax structure, and possibilities of rate rationalization, which were adjourned to the next council meeting. Subsequently, this particular GST Council Meeting held on12th June 2020to discuss GST compensation to states and ways to fund the same.

Finance Minister NirmalaSitharaman announced significant relief in GST Council Meeting for insignificant or smaller taxpayers with an aggregate turnover of not more than Rs 5 Cr. Moreover, the Finance Minister cut the interest rate from 18 percent to 9 percent on late submission of returns for February, March, and April.

There shall be no late fee for filing GSTR 3B returns with no liability as per the government’s announcement in GST Council Meeting, pending from July 2017 to January 2020. On the other hand, the maximum late fee has been covered to Rs 500 for those with liabilities. It was also mentioned that no decision on issues related to inverted duty structure and discussion on the GST rate cut took place in the meeting were also postponed.

Nevertheless, amid the revenue crisis, the council is looking at a few issues, especially in fertilizer, footwear, and textile sectors. GST council is thinking over-borrowing to fund compensation as per the government’s new concern. The government allowed taxpayers who could not get canceled GST registrations restored in time to apply for the cancellation of registration in another significant decision, up to September 30, 2020.

What are the major Highlights of the 40th GST Council Meeting?

Waiver from/Reduction in the Prior Period Late Fee

Quite a few taxpayers have unsuccessful in filing GSTR-3B for the period from July 2017 towards January 2020. For the concern, the GST late fee reduction for prior periods from July 1, 2017, towards January 31, 2020, is as follows:

For filing of returns done before September 30, 2020, for small taxpayers whose aggregate turnover is up to Rs 5 crore beyond July 6, 2020 (as per staggered dates) the rate of interest for late furnishing of GST returns for Feb, Mar and April 2020, is being reduced from 18% to 9% Per Annum.

Point to be noted that if tax for these months is paid before July 6, 2020, or date as applicable based on turnover, then there is no interest to be charged. If the returns are filed before September 30, 2020 (dates are yet to be announced), the late fee and interest will be waived off for May, June, and July 2020.

Class of registered persons having aggregate turnover up to Rs. 5 crores in the preceding financial year were granted relief according to the Notification No. 31/2020-Central Tax dated April 3, 2020. It has been done by way of conditional waiver of interest if GSTR-3B is filed within date quantified in the notification, as mentioned above.

Particulars and circumstances of notification are reproduced below for your easy understanding:-

Read our article:Latest Changes In GST Due To COVID 19

For all those registrations which were canceled till June 12, 2020, the period for seeking revocation of canceled GST registrations is allowed till September 30, 2020. According to the GST Act, the time limit was thirty days from the date of the issue of the cancellation order.

An opportunity is being provided for ﬁling of application for revocation of cancellation of registration up to 30.09.2020 to facilitate taxpayers who could not get their canceled GST registrations restored in time, in all cases where registrations have been canceled till 12.06.2020

GST Council is considering at a borrowing possibility for funding the compensation to states and Union Territories. In the past two months, the GST receiving has been 45% of the customary stages. The matter will be taken up, which is going to be scheduled in July 2020 in a special one-agenda council meeting.

Alteration of the Inverted Tax Arrangement

FM claimed that there is an issue of an excess refund being granted for accumulated ITC due to an inverted tax structure. An elaborate discussion happened about the issue pertaining to only the textile industry. However, sectors such as footwear and fertilizers could not be picked up for review. The same has postponed to the future meeting as the decision could not be taken at this point.

Finance Minister, along with the members, discussed the rate reduction of specific items as these were conveyed to the GST Council Meeting’sannouncement, which includes brick kilns, and pan masala linked items. NirmalaSitharaman has assured of taking up the substance in the next ordered GST Council meeting.

These are just an evaluation, and we always encourage our readers to examine the issue in-depth based on the considered notifications and circulars. This blog has tried to provide you a simple understanding of items grounded on the latest announcement by the GST Council Meeting on GST compensation, inverted tax structure, and possibilities of rate rationalization.

We at CorpBiz have the professional and legal expertise, to reduce your GST issues, as per your business targets. We would assist you with consultation, documentation regarding new structures, and submission of other compliances, along with filing the request/applications according to GST Council Meeting.

Read our article:Inspection under GST: A Concise Study

An Overview of the Union Budge...

The Ministry of Finance, Nirmala Sitharaman has laid down the most anticipated Union Budget 2021-2022 on February 1...