Shareholders Right – Know Its Variations and Procedures of Modification 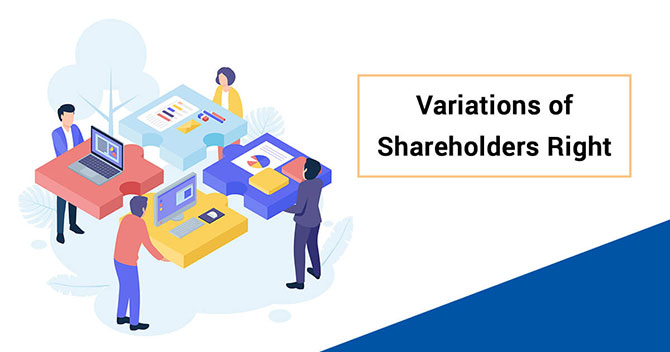 Becoming a shareholder in a company includes the right to share in the Company’s profitability, income, and assets. But many of the shareholders are unaware of their rights. This right that is possessed by all has an influence over the company management selection, pre-emptive rights to newly issued shares, and voting rights in general meeting. Here in this article, we will see the Variations in the Shareholder’s Rights and its procedure of Modification.

What are the Rights that the Shareholders enjoy?

The Shareholders of a company are granted various rights and protections under the Companies Act, 2013[1].

Following are the rights which the Shareholders enjoy –

Attend and vote at the General Meeting

What are the Variations in the Shareholder’s Rights?

The Share Capital of a company is divided into different classes of shares, and it is necessary to amend the rights attached to one or more classes of Share. But according to the MOA or AOA of the Company, the authorization to make any changes in the Shareholder’s right is not possible until the consent of the shareholder in writing.

Besides the above given requirement, these two are the major and mandatory requirements for variation in rights of the shareholder:

Procedures for the Variation in Shareholders Right

There are certain procedures which need to be followed for any variations in the shareholders right.

Modification of the Shareholders Rights

Every class of Share has specific rights mentioned in the Articles of Association or MOA of the Company. Any Kind of modification in the class rights must be approved by the shareholders in a meeting. Although in some cases, modification of class rights could be held without a class meeting.

A Board meeting is held which will pay the following resolutions:

The Shareholders enjoy several rights in a company, but at times the Shareholders’ rights in a company vary for different classes of shares.  It is necessary to amend the rights attached to one or more classes of Share. Therefore, it requires compliance of certain procedure and must be as per the MOA or AOA of the Company or in accordance with the terms of the issue of shares of that specific class.

Read our article:Transfer and Transmission of Securities – Know the Procedure of Transfer, Time Limits, and Penalties

An Extensive Outlook on the SE...

Capital plays a pivotal role for any organization to support its activities financially & maintain its liquidit...

How does a Company Issue Deben...

The issue of raising funds for a company is the most challenging thing that the company faces during its initial st...