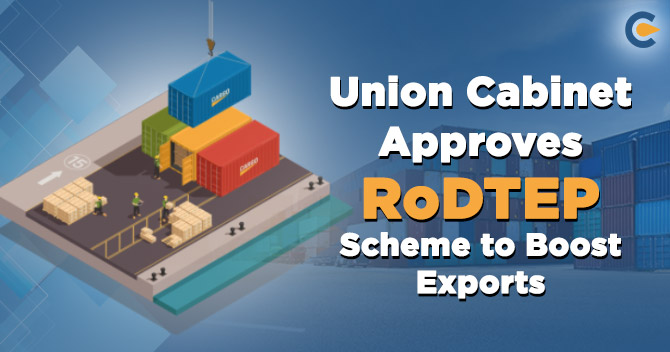 The Union Cabinet on 13th March 2020 approved the introduction of a new export scheme called Remission of Duties or Taxes on Export Products (RoDTEP). The approval came from the Cabinet Committee on Economic Affairs, chaired by Prime Minister Narendra Modi. The said scheme will replace the current Merchandise Export from India Scheme (MEIS) in a phased manner. Earlier World Trade Organization (WTO) had declared that the MEIS scheme was violating global trade rules.

The RoDTEP scheme will benefit exporters as it will allow them to reimburse all taxes and duties paid by them like value-added tax, electricity duties and the fuel used for transportation, which is not getting refunded under any other existing scheme.

“Whatever taxes, or duties or local levies imposed by the Centre, State or local governments that are not getting refunded through any other scheme, will be done through RoDTEP in a way that is compliant with the World Trade Organization (WTO) norms.”

Introduction of RoDTEP scheme[1] is expected to boost the domestic industry and Indian exports providing equal opportunities for Indian producers in the International market. Under the newly introduced RoDTEP scheme, an inter-ministerial committee will determine the rates and items for which the reimbursement of taxes and duties would be offered. Moreover, in an effort to promote Digital India, the refund to the exporters under the said scheme will be issued in the form of transferable duty credit/ electronic scrip, which will be maintained in an electronic ledger. The scheme will be implemented with end to end digitization.

An Outlook on the Code on Soci...