Types of companies under Companies Act, 2013 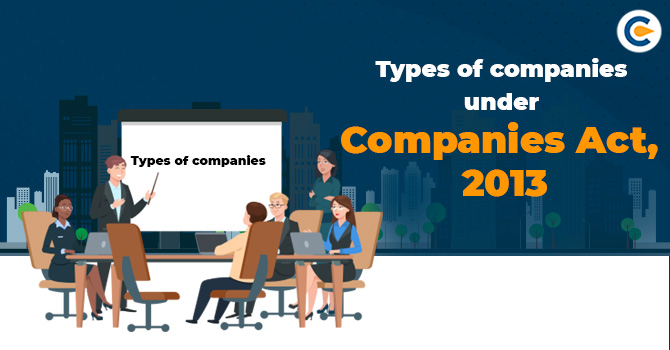 Startups today are the world’s indicator of growth. They are expanding all around the globe due to various benefits. The younger generation is developing ways to transform the lives of individuals and the issues that we have to deal with and offer them an opportunity to make a difference in an entrepreneurial manner.

However, in the current flurry of startup companies, most of us do not think about where it all began. Indeed, company registration is the initial step that all the journey of entrepreneurs starts from. Every startup requires this step to create an organization that is large in size. Various types of companies can be registered to start a business in India. In this article, we will discuss the types of companies registered under the Companies Act,2013.

Company registration under the Companies Act, 2013 grants your business a legal status under a particular jurisdiction, and it sets up the Company’s existence separate from directors and the company shareholders. Registering your Company helps your entity grow its Market and expand the business as the legally recognized companies are preferred in the corporate world.

Types of Companies Based on Number of Members-

Further, the business arrangement prohibits the Private Company from inviting the general public to subscribe to its shares and securities.

Common requirements for private company incorporation include; presence of two directors and inclusion of term “Private Ltd” at the last of the company’s name.

Note -Earlier, there were criteria for the minimum capital requirement. But as per the Companies (Amendment) Act 2015, there is no need to have any minimum amount for obtaining Private Limited Company Registration.

One of the distinctive features of a One Person Company is that it separates it from other company structures under the Companies Act 2013. Under OPC, the Company’s sole member needs to mention a nominee during Company incorporation process. The reason behind it is that since there is only one member in an OPC, so after his/ her demise, the person nominated will become the sole member. But, it is worth noting that the same does not happen in other types of Companies as they adhere to the concept of perpetual succession.

Types of Company Based on Legislation

I. Statutory Companies: Statutory companies are set up following a specific law passed by the central or local authorities and fall under the provisions of the respective laws.

Types of Companies Based on Liability

I. Unlimited Company- Unlimited company is a company having total liability on its members. In Unlimited Company, the members are liable for undertaking the Company’s debts in proportion to their individual interests, and their liability is unlimited.

III. Company limited by Guarantee– A company limited by guarantee is a company with no shareholders .A company is owned by its members who agrees to pay a nominal amount in the occurrence of company’s being wound up.

Types of Company Based on Domicile

II. Foreign Company- Section 2 (42) of the Companies Act 2013 defines a Foreign Company as a Company incorporated outside India but has a place of business in India either by itself or through its designated agent.

Various other types of companies registered under the Companies Act,2013

I. Section 8 Company- Section 8 companies, indicate a company that is incorporated under section 8 of the Companies Act 2013. Section 8 companies are known as NPOs(Non-Profit Organizations). Section 8 company holds a valid license from the Central Government. It works to promote commerce, art, sports, science, social welfare, education, research, religion, environment protection, charity, or any other object.

II. Small Company –Section 2 (85) of the Companies Act 2013 defines a Small Company as a company other than a public limited company. To be in the category of Small Company, the paid-up capital, and an annual turnover of the Company must be less than Rs 50 Lakhs and Rs 2 Crores, respectively.

However, it shall be prudent to note that no clause of a small company shall apply to the entities as follows:

A company that is administered by any particular act;

Note: A small company enjoys all the benefits and exemptions provided under the provisions of the Companies Act.

III. Dormant Company-The Dormant Company means a company incorporated under section 455 of the Companies Act 2013 for some future project, business transactions, some property and asset, and the same has no significant accounting transaction. Therefore, such inactive company members will furnish an application to the Registrar to declare that Company dormant.

Note-A company can get the status of Dormant Company if the Company has not furnished its annual return for a period of two years.

IV. Producer Company- Section 465(1) of the Companies Act 2013 deals with the Producer Company. It means a legally recognized body of agriculturists and farmers that aim to provide the following:

Also, the members of a producer company must mandatorily be a primary producer in nature.

In a nutshell, before registering your business as a company, it is essential to look at the types of companies under the Companies Act,2013. The companies are based on various factors and types mentioned above, and it is upto you to decide which kind of Company is suitable for your business.

Procedure to increase the auth...

Every organization needs to procure capital to execute their day to day operations or accomplish their long-term go...

BJP governance has a proven track record for promoting technology and industrial growth. In the continuation of suc...