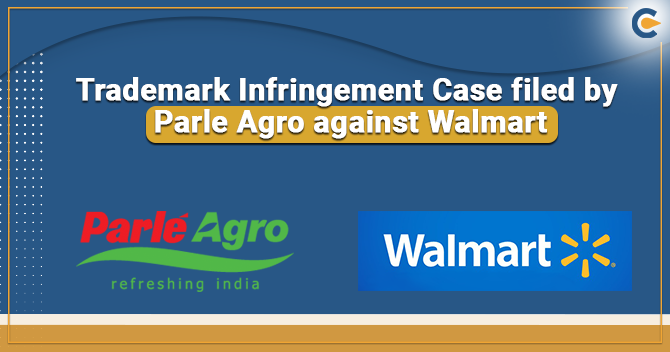 A Domestic company challenging an international company for a legal battle and winning with flying colours is quite a rare phenomenon. However, it did happen when Trademark infringement case was filed by Parle Agro against Walmart.

Most of the cases under trademark are concerned with deceptively similar trademark. As it is implied by its name, “deceptive similarity” can be defined as a considerable degree of resemblance between any two products or marks that may deceive or confuse the general public of mediocre mind-set into believing that the products or marks are associated or linked with each other. The Indian courts generally verify certain conditions in order to determine the degree of the deceptive similarity. The factors that help to determine the degree of similarity includes the Principle of Phonetic and Visual Similarity, Rule of Entirety, that is, the mark is to be considered as a whole, degree of likelihood of confusion, and lastly, the goodwill attached to the mark being infringed.

What was the Reason that led Parle Agro to file an Infringement Suit against Walmart?

The Walmart India owns about 27 stores providing a variety of almost 5000 items in cash and carry wholesale format. The Walmart has extensively established itself in India and it attracts a large number of customers. One of these 5000 items is an apple flavoured drink which landed the Walmart India into legal trouble as Parle Agro claimed that the Apple Flavoured drink offered by the Walmart is deceptively similar to its trademarked Appy Fizz in aspect of packaging and selling. Thus, Infringement suit was filed by Parle Agro against Walmart.

The case was heard in Bombay High court by the Justice BP Colabawalla who put a restrain on retailing of the conflicted product until a further notice.

Read our article:A Deep Analysis on Benefits of Trademark Registration

Summary of the Case- Parle Agro against Walmart

Parle Agro is a reputed beverage selling company, founded in 1985, having its head quarter in Mumbai[1]. It is also the original producer of the drink named Appy Fizz, which is an apple flavour, based soft drink. Walmart India launched a product namely, Fizzy Apple, which was also an apple flavoured soft drink.

It must be brought into light that the company is the owner of various trademark registration, including “APPY FIZZ” bearing number 1668879,” APPY FIZZ (DEVICE OF APPLE)” bearing number 2106067, each under Trademark Class 32.

Parle Agro, in its petition, stated that the product manufactured by the Walmart India is “using identical font, style and colour scheme” as Parle’s Appy Fizz. The advocate of the petitioner, Hiren Kamod stated in the court that the impugned product of the defendant is similar to the plaintiff’s product in aspect of marking, colour scheming, identical shape and labelling.

The attorney of Parle Agro further added that such imitation evidently shows that the Walmart was attempting to create confusion among the general public and to seek the advantage of the well-known existing product Appy Fizz.

In order to support his case, he added that Appy Fizz was launched back in 2005 and since then, it has been playing a dominating role in Apple Juice segment, holding almost 90% shares.

Directions by the Court

However, he failed in his defence, and on the 9th of July 2020, over video conferencing, an interim injunction restraining Walmart India from retailing the disputed product until further orders was imposed by Justice B. P. Collabawala. Though, it was further added by the Hon’ble justice B.P Collabawala that it was a temporary order and was not based on the merits.

Recently, the final judgement concerning the matter came out in which Justice KR Shriram recorded Walmart India counsel’s statement “not to use the label” as an undertaking to court and disposed of the interim relief application filed by the Parle Agro against Walmart India for the infringement of Trademark.

In this matter of trademark infringement, Parle Agro was successful in defending their trademark and in protecting their rights. Not every day, we get to witness a domestic company standing up against a multi-national company and ending up winning the case.

In the final verdict, Justice KR Shriram, ordered the Walmart India to not to use the company’s label for its apple drink and as a final result, the interim application filed by Parle Agro against Walmart for infringement of trademark was disposed of.

A trademark is a type of intellectual property that protects the unique brand names, logos, symbols used to sell th...

Trademark Registration is the process of registering a company name brand name, device, logo or symbol and has its...