Highlights on The Appropriation Bill, 2020 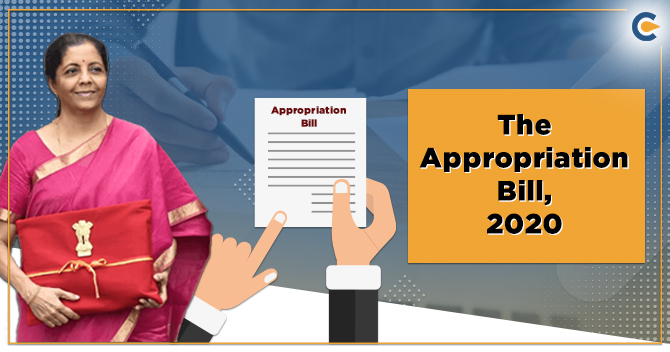 The Lok Sabha on 18th September, 2020 passed The Appropriation Bill (No 3), 2020 and the Appropriation Bill (No 4), 2020 by a voice vote during the ongoing Parliament Session. Finance Minister Nirmala Sitharaman has moved both the Bills for deliberation and passing after debate of 4 ½ hour on Supplementary Grants for 2020-21 as well as Demands for Excess Grants for 2016-17 and successive voting.

Reason for Passing this Bill in 2020

The Appropriation Bill (No 4), 2020 gives permission for payment and allotment of money of the Consolidated Fund of India for services provided in the financial year 2020-21, while the Appropriation Bill (No 3), 2020 provides for approval of allocation of certain sums out of the Consolidated Fund of India to meet the amounts spent on specific services during the FY ending on March 31, 2017, in excess of the amounts granted for the services for that particular year.

Read our article:Overview on the Insolvency and Bankruptcy Code (Second Amendment) Bill, 2020

What is Difference between the Appropriation Bill & Finance Bill?

Appropriation Bill is kind of money bill that permits the government to withdraw funds from the Consolidated Fund of India to meet the expenses during the course of any FY. According Article 114 of the Indian Constitution, the government can withdraw money only after getting approval from the Parliament.

Whereas the Finance Bill consists of the provisions related to finance of the expenditure done by the government, while the Bill identifies the quantum and purpose for taking out money.

The Appropriation Bill was first passed by the Lok Sabha[1] and then transferred to the Rajya Sabha. It has the power to advise any modification in this particular Bill. Yet, it is the privilege of the Lok Sabha to either accept or reject the recommendations of Rajya Sabha.

The government introduced the Bill in the lower house of Parliament (Lok Sabha) after consideration on the Budget proposals as well as Voting on Demand for Grants.

Read our article:Name of Independent Director in Data Bank can be Included in next 3 Months: MCA

The campaign would remain active for 11 days from the date of launch. The E-campaign aims to target those taxpayers...

GST Can’t be Imposed on Serv...