Introduction to Suit for Trademark Infringement 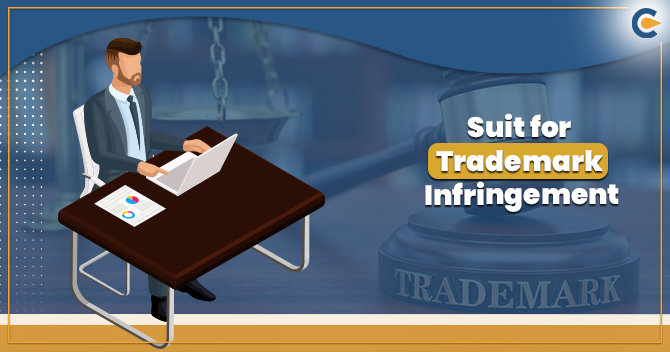 Trademark infringement is the unapproved application of a trademark regarding products and additionally benefits in a way that is possibly going to cause confusion, complexity, or misunderstanding about the source of the products.

Trademark infringement is an abuse of the exclusive rights conferring to a registered trademark without the permission from the trademark owner or any licensee. Under this article, we would be discussing how one can file a Suit for Trademark Infringement.

What do you mean by Trademark, Law Suit, and Trademark Infringement under Legal Context?

First, let’s understand what does Trademark, a Lawsuit and Trademark Infringement stands for-.

A Trademark also popularly known as brand name in the layman’s language is a symbol which represents a company. It can be a word, a letter, a picture, device label, or a combination. It also acts as a tool by using which general public can differentiate between the goods & services offered to them.

When a person who is not the owner of a trademark, uses the proposed mark with mala-fide intent to create a false identity among the customers with the average mindset in the course of trade, is called infringement.

In other words, if any person uses another person’s registered trademark and claims to own it, it is a case of infringement. The primary condition is that the trademark should be registered before initiating an action for infringement.

Ingredients for Initiation of Suit for Trademark Infringement

As per the law, once a trademark is registered under a specific person for specific goods and services, he or she holds the exclusive right of that trademark in relation to the said good or service.

The Provisions related to the filing of Suit for Trademark Infringement provided in Trademark Act, 1999 are explained below-

Section 27(1) of the Trademark Act, 1999 specifically entitles a person to initiate a legal proceeding to prevent infringement and recover damages of infringement of his registered Trademark.

Section 28 confers upon the registered proprietor the right to exclusively use his registered Trademark and to obtain relief against the person who is an unauthorized way uses the trademark.

Section 29 of the Act provides for infringement of trademarks. The section provides nine subsections that enumerate different ways in which infringement occurs.

There are certain conditions provided in section 29(1), 29(2), 29 (3) which must be fulfilled to initiate a legal proceeding for Trademark infringement, are given below:-

What Constitutes the Use of a Trademark?

There are few important case laws associated under the trademark Infringement, which are as follows:-

The plaintiff alleged that the defendant’s mark Fexim is deceptively similar to the registered Trademark “Phexin” which is used for pharmaceutical preparations.

The packing material was also deceptively similar, and it was claimed by the plaintiff that the intention of the defendant is not only to infringe the trademark, however, also to pass off the goods as both the marks are also phonetically similar.

The plaintiffs were running his business under the Trademark “BIKANERVALA” and alleged that respondent’s Trademark “AGGARWAL BIKANERWALA” claiming that the said Trademark is deceptively similar to the Trademark of the plaintiff who was used from 1981 and also got registered it in the year 1992.

The judgement was passed by the court in favour of plaintiff. The defendant was restrained from producing, selling or advertise any food article under the trademark ‘AGGARWAL BIKANERWALA’

There are certain exceptions against the infringement of the Trademark, and the exceptions are mentioned in Section 34. The act states that the proprietor or a registered user of registered Trademark cannot interfere or put restrain on the use by any person of a Trademark similar to his if the other person has continuously used that Trademark from a date prior-

The Registrar should not refuse (on such use being proved) to register the second Trademark by reason only to the registration of the first stated Trademark.

According to the provisions of the Trademarks Act 1999, the registration of a trademark is not a pre-requisite to avail the criminal or civil remedies if the rights of a party are violated. Both civil and criminal remedies can be availed in India against infringement and passing off.

For the civil remedies, one can seek aid from the provisions of the Sections 134 &135 of the Trademarks Act, 1999, under which the court grant relief in any suit for infringement or for Passing Off including the Permanent & Interim injunction. Injunction is to put an order to stop.

Section 103 of the Trademarks Act, 1999 provides the provision under which criminal remedies can be availed for the encroachment. Infringement of a trademark is a punishable offence under which, the offender is punished with imprisonment for a term of 6 months to 3 years and with fine ranging from 50,000 but which may extend to INR 200,000.

Being a legal right, Section 134 of the Trademarks Act, 1999 provides the jurisdiction for filing of suit for Trademark Infringement. According to the provisions, a Trademark infringement Suit can be instituted before a District Court underlining the local limits of whose jurisdiction, at the time of the institution of the suit or other proceeding. The local limits can be the place where the person voluntarily resides, carries business, or works for profit. Contact our professionals at Corpbiz to know to get hassle-free Trademark Registration in India.

Read our article:Everything you need to know about Penalties & Remedies for Trademark Infringement in India

Trademark Search tells you to know if there are similar trademarks available and also it gives an idea of where you...

Trademark of Domain Name in In...

In India, the rise in digital marketing and eCommerce has led to a massive growth in demand for an online presence...