Right to Inspect by Members of the Company 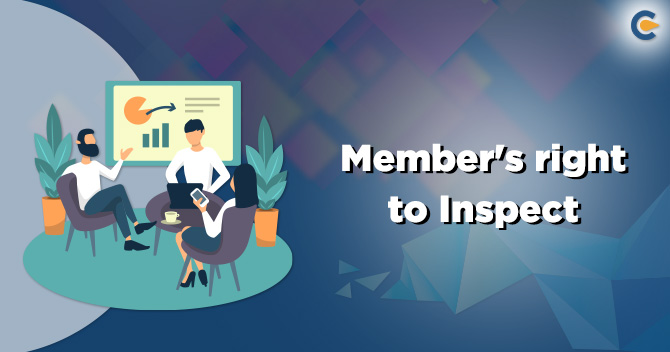 The companies act, 2013, has given many powers and rights to shareholders, directors, debenture holders, etc.  The persons on the key managerial position, such as directors and other officials, have been given a statutory position and certain rights. Further certain rights have also been provided to various members of the company, which also includes the director’s liability to maintain statutory financial records and register of the company as per the provisions of section 170 of the companies at, 2013. In order to maintain transparency in the any company after due process of Company Registration, members have also given right to inspect and take extract of such records and register. This is in order to follow and maintain corporate governance provisions.

What is the definition of term ‘Member’?

“member,” in relation to a company, means—

What are the provisions under which company records are maintained and kept?

“Any such member, debenture holder or another person may-

What are the various provisions under which member’s right to inspect various companies register are defined?

In order to maintain corporate transparency and governance, certain rights of members in order to inspect records and register maintained by directors of the company are defined under Section 171 of the companies, 2013.

As per section 171 of the companies act, 2013, certain right of members to inspect records has been mentioned. According to which:

Is there any fee prescribed for getting inspection copies?

Prescribed timeline for getting copies of records:

Any person who applied for extracts or copies of records from company that company is liable to furnish such record copies to the person within 10 working days from the date of request of furnishing copies as per section 163(4) of the companies act, 2013[1].

If company denies or fails to provide such copies as requested, in that scenario, such company or any defaulting office of the company can be penalized up to amount of Rs. 500 per day for entire defaulting period.

Remedy In case of refusal by company to furnish record copies:

Any person who is aggrieved by company or its official can approach NCLT, i.e., National Company Law Tribunal of jurisdiction where companies registered office is present. The concerned tribunal may pass such order to order defaulting company to allow aggrieved person to furnish such companies as required or as the case may be. Such a petition can be filed under Section 163(6) of the companies act before NCLT or the tribunal.

Transparency to records of the company is important in order to maintain corporate governance. And members play an important role in the same by accessing the information and keeping a record of such transactions and records of the company. Under new laws of companies act of 2013, many pragmatic provisions have been laid down comparatively erstwhile companies act of 1956, which have duly exercised positive role in corporate governance and transparency thereon.

Punishment for Failure to Dist...

As per the provisions of Section 123 of the Companies Act, 2013, a company which has been incorporated as per the p...