Punishment for Failure to Distribute Dividends 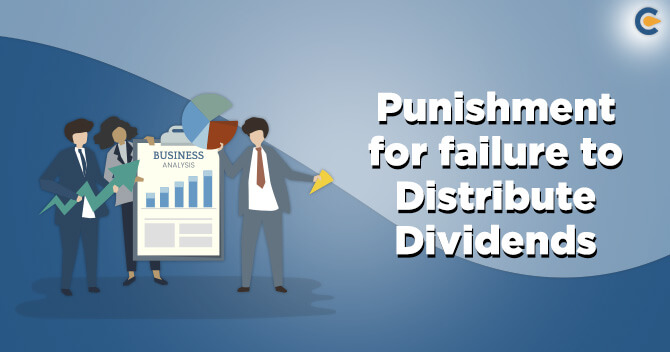 As per the provisions of Section 123 of the Companies Act, 2013, a company which has been incorporated as per the provisions of Companies Act except a company incorporated under Section 8 may declare its dividend. In case if a company fails to pay a dividend within the prescribed period as defined in the law, there are certain repercussions that company may have to face. Here in this article, we shall discuss the definition, meaning and consequences of not paying the dividend on time.

What is the Definition of Dividend?

The term ‘dividend’ has been defined under the provisions of Section 2(35) of the Companies Act, 2013[1]. This term has its origin from the Latin word ‘Dividendum’ which means things which are meant to be divided. In simple words, it means net profit proportion of the company which is not maintained by the company after availing the company registration successfully. This profit is further dispersed among the shareholders of the company as per their shareholding proportion.

Section 2(35) of the companies act, 2013 has defined the term dividend as which includes any interim dividend. In other words, it means:

When are Dividends Paid?

Once the dividend amount is declared by company it becomes debt for the company that company has to pay to its shareholders. But before declaration, company need to adopt the account of books first, which is prerequisite before a declaration. In case company fails to pay the declared amount to shareholders in prescribed time, shareholders have the authority to file a suit against company for recovery of amount due against dividend.

Who all have the privilege to declare dividend?

Important provisions related to the dividends:

Procedure to be followed for dividends declaration:

The penalty in case of failure disperse dividend

In case if a company doesn’t comply with the provisions of Companies Act and fails to distribute dividend among its shareholders, then penalty can be imposed on company. As per the provisions of the companies act, 2013 under section 127 of the companies act, 2013 in case a company fails to make payment of the dividend within a prescribed period of 30 days from the time of declaration of dividend then company, as well as director, can be penalized as mentioned below:

For a company fine can be imposed in terms of interest @ 18% per annum from the date of default, and it is also applicable for a director who is also a criminal offence which may lead to imprisonment up to a period of 2 years along with fine of Rs. 1000/- per day for the entire default period.

Is there any exception to the penalties, as mentioned under Section 127 of the Companies Act?

There are certain exceptions that have been given to the companies which don’t comply with the provisions of Section 127 of the Companies Act, 2013 as mentioned below:

Many provisions have been made in order to avoid any default in regards to division and payment of dividend. Even nonpayment of the dividend within prescribed time has been made a criminal offence along with penalty in case of shareholders. But still, there are many companies which still avoid these provisions. Although certain exceptions are also given still, it is the responsibility of every company and individual shareholders to follow the provisions of law w.r.t to dividends division and payment.

Ministry of Corporate Affairs (MCA) under sub-section (1) of 205C of the Companies Act, 1956 has established a fund...

All You Need to know about MSM...

MSME (Micro Small and Medium Enterprise) is the pillar for the economic growth in many developed and developing cou...