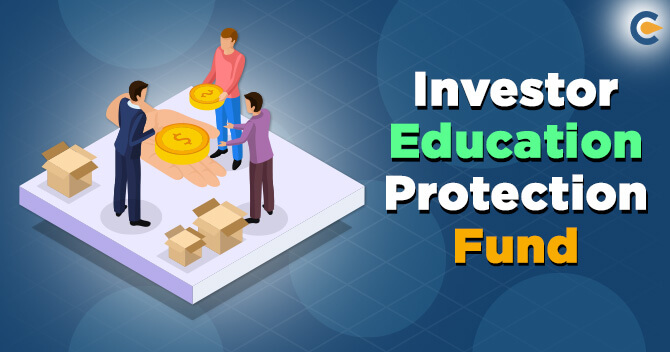 Ministry of Corporate Affairs (MCA) under sub-section (1) of 205C of the Companies Act, 1956 has established a fund called as the Investor Education and Protection Fund (IEPF) through the Companies (Amendment) Act, 1999. The prime objective behind this was to educate, aware and secure the interests of investors in securities and further encourage governing the securities market and things connected. IEPF is supervised under Securities and Exchange Board of India (Investor’s Protection and Education Fund) Regulation, 2009

What is the Reasoning behind IEPF?

The main apprehension behind IEPF is to account for unclaimed dividends account of a company, share application amount or matured debentures which remains unclaimed for a period of seven long years from the date of declaration of dividend. This unclaimed amount, along with interest accrued, shall be transferred by company to utilize for investor education, awareness activities and further for protection activities. In order to transfer the same, a company need to share certain details with authority. A statement containing the details of the transfer shall be shared by company to authority in a prescribed form. Further after due scrutiny of said funds concerned authority which administer the said fund shall furnish a receipt to the company indicating such transfer.

How do authority so utilization of funds?

Below mentioned shall be part and parcel of IEPF fund if remain unpaid for a time period of 7 years:

How IEPF is being Managed?

In order to manage IEPF, Government has constituted a Committee consisting various members such as secretary, various members from Company/Corporate Affairs, senior members from Reserve Bank of India (RBI) , Security and Exchange Board of India (SEBI) and various others experts in this domain. The reasoning behind forming a committee is to aspire fund utilization for activities like investor education and protection. Further, it is also the liability of the board to ensure proper maintenance of all accounts and other relevant details related to the fund.

The objective of IEPF and the said committee is to build a lawful and fair stock market to secure the interest of investors.  Further, to empower investors by educating them in order to enable systematic and effective competitive market, ensuring guaranteed and safe investment avenues.

Read our article:Essentials to Create a Compelling Investor Pitch Deck

From the time of its commemoration, IEPF has conducted numerous awareness programs in order to promote protection and investor education. Authority has conducted these programs through institutions engaged with it such as Partner Institutions, Ministry of Mass and communication, IT department of Indian Government, CSC etc. Further authority has conducted various awareness programs focusing on educating people about the significance of investment, providing information about mutual funds, debentures, pension funds, equity, investment policies etc. with the help of various associations like ICSI, ICAI, Institute of Corporate Affairs, National foundation and many others.

The IEPF, in order to create awareness among people, conduct various awareness programs by engaging partners throughout the country, basically in rural and semi-rural areas.

Various awareness campaigns are conducted taking in alliance with various Educational institutions, Professional academies and institutions, various local chambers and associations. Yearly many such kinds of campaigns or programs are being conducted by association with help of hundreds of associations or participants. Authority also sends the invitation to local government authorities for their participation to enlighten people about it. Volunteers do a detailed writeup of the campaign and upload complete details of the program over the official website of IEPF to create awareness among people.

More than 36,000 Investor Awareness Programmes have been organized by authority throughout the country in various rural and urban areas. This was done in order to create awareness among people with the help of various Professional Institutes organized under the Ministry of Corporate Affairs (MCA) and Common Service Centers (CSCs) and others.

The main responsibility of the authority:

As per the provisioning of the amendment act, the authority has been given the responsibility to administer and regulate the funds assigned for Investor Education and its Protection.

Various forms to submit with authority:

The mentioned forms can be downloaded from the official website- http://www.iepf.gov.in/IEPF/corporates.html. Of the authority.

Recently the authority has simplified the provisions of the act dated 14.08.2019 by amending the Investor Education & Protection Fund (Accounting, Audit, Transfer and Refund) Rules 2016 vide GSR No.571 (E). By this authority has simplified the procedure for claiming refund with the authority, i.e. the Investor Education & Protection Fund Authority. Via amendment certain provisions have been changed to simplify the refund procedure inter-alia providing transparent and faceless digitalization procedure of claims by the authority. The further amendment has also simplified and systemize the procedure and has made it system-driven and time-bound with procedural enforcement.

Several companies don't realize that their balance sheet is not perfectly synchronized with their cash flow. By opt...

The introduction of Indian Depository Receipts (IDRs) in the Indian market is a hope for people to make money for t...