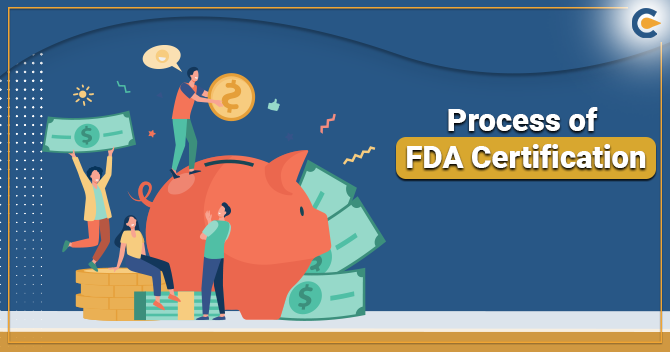 Food and Drug Administration (FDA) established in 1906 is a government agency under the passage of the Federal Food and Drugs Act. The FDA works in development and regulation of new generated drugs and clinically tests on all new medications. In this article, we will be discussing about the process of FDA Certification.

What is FDA Certification?

The Food and Drug Administration (FDA) is a government agency within the U.S. Department of Health and Human Services. This major responsibility of FDA is protecting and managing public health and related authorities by assuring the safety and security of human and biologically generated product.

The Central Drugs Standard Control Organization (CDSCO) under the Directorate General of Health Services, Ministry of Health & Family Welfare[1], and Government of India is the National regulatory authority of India for pharmaceuticals and medical devices that is equivalent of the FDA in the US.

The Drug Controller General of India (DCGI) is one of the departments of CDSCO responsible for regulating and safeguarding the manufacture, approval and sale of medical services as of drugs and devices in India.

This also extends to clinical trials along with expert review over effect on human health and enforcement under the Drugs and Cosmetics Act. This DCGI department extends to inspection, audit, and surveillance that are made through different zonal branches across India.

What is the FDA Certification Process for Drugs?

The U.S. Food and Drug Administration’s (FDA’s) Center for Drug Evaluation and Research (CDER), the U.S. Department of Health and Human Services, the government regulatory authority controls the drug-approval process. They were commissioned with reviewing new drugs and medical devices before companies acknowledge them in market.

There are steps for pharmaceutical companies seeking FDA Certification for launch of product in market. The steps are discussed below:

The submission of investigational new drug application is based on the initial testing report of the drug. This application contains detailed information of the drug tested along with manufacture, composition, testing, reactions and suggestion for human testing. The report is presented to the FDA.

The FDA reviews the report, make sure the drug is safe and do not cause unreasonable risk that can harm human health.

The approved drug further proceeds for human testing. The major intensity is given on drug safety on humans. The test includes 20 to 80 healthy human volunteers. The importance of this testing is to check the after effect, safety and frequent side effects of the drugs in human body.

According to the FDA, phase 2 includes 100s participants. In this stage, there are two categorization of testing. The first category is for the humans on whom the drug will be tested, to check the efficacy of drug. Another half category human receives placebo. The researchers observe the cases systematically and accordingly, the drug reaches Phase 3.

The third phase increases the testing participants to thousands. This stage study and focuses on preciseness, gathering additional information, safety and ideal doses in humans. Generate report based on testing in different population, and combination of drugs for approval of drugs.

Before the submission of new drug application, the FDA organizes a review meet with drug sponsors.

In this step, the New Drug Application (NDA) is formal approval claimed by the sponsors from the FDA for introducing drug in to U.S. market. The application includes all testing and analysis made on animal and human to reach drug at this stage.

After the company collects and analyses all clinical test, the New Drug Application is submitted for the FDA Certification. After filing of NDA, the FDA reviews the product label. This review is conducted for confirming the clinical information for safe usage of drugs. The FDA also takes action to inspect manufacturing plants where the drug will be made.

The FDA Advisory Board consists of group of independent physicians, specialists and other clinicians, plan a meet to discuss thorough study made on NDA with the FDA reviewers and manufacturers of the product. The result of this meeting is the Advisory Board make recommendation for approval or not, to the FDA through fair count of votes.

The advisory team also includes physicians, pharmacists, chemists, statisticians and patient representatives. The votes add a huge worth for the test approval. The FDA accepts the decision of the Advisory Board but is not obligated for same on every decision.

After final approval from the Advisory Board, the drugs follow statement of physicians to prescribe. The drug is not immediately launched in the market, as it must include patents disputes, manufacturing issues or substance designation from the DEA.

The pricing is decided and revealed, during product approval but the economic part of the product is not considered under FDA approval process. Through this step, after approval from Advisory Board and the FDA, the final approval/ certification is granted to the drug and sponsors to introduce the drug in the market.

The Food and Drug Administration (FDA) plays a role to protect the rights and welfare of the people in clinical trials to verify the quality and integrity of the drug analyzed. The FDA certification does not mean that drug sanctioned is safe.

That needs to be noted, after testing thousands and completing all steps, there are number of cases suffering side effects of the drug. Each person’s body will react differently to the drugs. The affected human has all legal right to take action against the pharmaceutical company in case of severe health damage.

The chances of misconduct are minor as the testing and review is studied and analyzed vigilantly. The certification granted on detailed procedure and study made by different specialist on number of human testing.

The FDA concludes that the benefits counterbalance the known risks from the approved product. Once approved, after other necessary completion of requirement, the company can launch into marketing and selling the product.

Read our article:s there any Requirement of Food Inspection in India?

Exporting food items to the US...

Wish to ship export food items from India to the USA? Sounds like a profitable business option. Welcome to the exci...