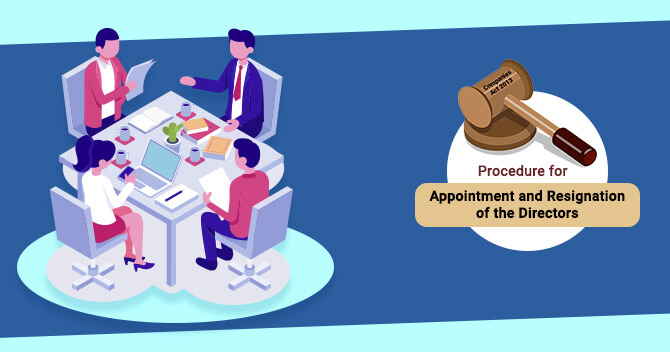 The company is a legal person who needs a natural person for managing, controlling, directing and overseeing the affairs of the company. In a Private Limited company, the board of directors can appoint or elect one person or more than one person as a director who implements and determines the policies of the company the Appointment of the Directors is done with the process discussed below.

Under Section 149(1) of the Companies Act 2013[1] (hereinafter act of 2013) there has to be a board of directors in every company includes only individuals or natural person and not any other legal entities or legal persons and Section 152 defines the appointment of directors. However, under Section 168(1) of the act defines the resignation of the directors by giving a writing notice to the board followed with due process.

Appointment of the Directors

The appointment of the directors is made as per the Articles of Association (AOA) or by virtue of section 152 of the act the subscribers to the memorandum shall be deemed directors f the company. There are categories of directors under act 2013 which are

Under section 164 of the act, the following disqualifications are provided:

The requirement of director in a company

The company requires a maximum of 15 directors on the board of the company, whereas can the company can increase the number of directors by passing a special resolution in AOA.

Procedure for the Appointment of the Director in a company

A director is a person who is appointed to perform the duties and functions of a company as per the provisions of the act of 2013. Appointment of director’s procedure is mentioned under section 152 to 159 of the Companies Act 2013 is described below:

Section 153- The application for the allotment of the Director Identification Number (DIN) has to be made by the person intending to be a director of a company before the central government along with the depositing of the prescribed fees.

Section 154- The central government then allot the DIN (Director Identification Number) in favour of the applicant within the one month of the receiving of the allotment application made.

Section 156- The existing director has to disclose his DIN (Director Identification Number), which he has obtained by the central government within one month of the receiving. He has to intimate to the company or the companies wherein he is a director.

Section 157- The company has to inform about the DIN (Director Identification Number) of all the directors to the registrar or the authorised person within the 15 days of receiving the intimation.  The fees also have to be submitted as prescribed by the central government and also mentioned under section 403. On the failure of the intimation within 15 days the company has to pay fine for Rs 25,000 twenty-five thousand which may extend to Rs 1,00,000 one lakh.

Section 158- Every company or person has to mention DIN (Director Identification Number) while furnishing any return, information or particulars in relation with the director or contain any reference of the director.

Section 159- If any of the provisions under section 152, 155 and 156 have not been followed then fine of Rs 50,000 fifty thousand has to be imposed or may be liable for the imprisonment for the six months. If there is a continuation of the contravention of the provisions then per day fine of Rs 500 has to be imposed till the contravention continues.

The appointment of the directors of a company can be done by any one of the following ways:

Documents furnished on Appointment of Director

Resignation of the Director

A Director of a company can give resignation from the office by giving a notice in writing to the board of the company under section 168(1) of the Companies Act 2013.

After this, the company will take the following steps to remove the concerned name from the register of Directors on the MCA Portal[2].

The appointment of the director and its procedure can be made easy with the help of the team of experts at Corpbiz. The registration for the Appointment and Resignation of the Directors are assisted and verified by the Corpbiz, and we are ready to serve you as well. The resignation is also provided to the directors and is also managed and guided by the company.

In view of the Company Act, a shareholder holds the right to remove the director from an organization before the ex...