Potential of Lithium-ion Batteries in India 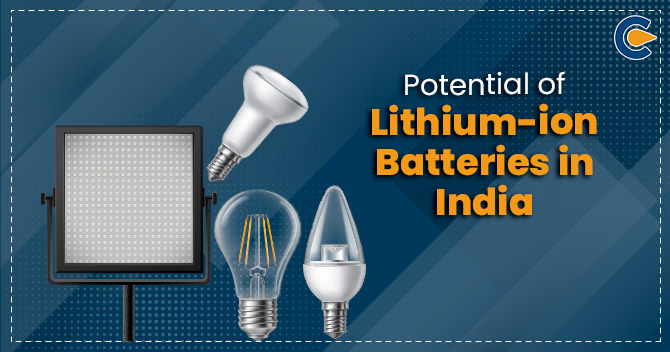 ‘Make in India’ is not just a slogan. It is a part of an enormous arrangement designed by the government to revitalize the most underperforming sector of the Indian economy- Manufacturing. India is a $2.3 trillion economy and has the third-largest purchasing power parity. India has immense potential to become a manufacturing powerhouse: a large pool of skilled and unskilled labour force, half of China’s wages, and a vast domestic market. These factors make a case for India because China, the world’s most prominent manufacturing destination, faces peak labour shortages and exponential wage growth.

India does shine in niche manufacturing sectors, such as Textiles, automobile parts and petrochemicals. India also showcased its manufacturing capability when it came out to be one of the world’s largest manufacturers of the Covid-vaccines. India has had an excellent report card in manufacturing niche products in the last decade. India homes a humongous repertory of engineers and scientists who can contribute to strategizing a lean manufacturing supply that can place India on a global map in manufacturing. India can diversify its manufacturing portfolio by investing in products with immense potential, like the lithium-ion batteries.

India can lead the manufacturing of Lithium-ion batteries, which has the potential to go down as the most critical platform technology in this century. The platform technologies are meticulously formulated after decades worth of innovation. These technologies birth large industries and jobs and give the geopolitical advantage to the country that fosters them. India has an opportunity to place itself in the most crucial part of the Lithium-ion batteries value chain: The midstream. China controls the midstream development of Lithium-ion batteries despite having few mineral reserves, and battery rich mineral-rich regions like Australia and Latin America exercise little control.

The automobile industry will drive the global demand for Lithium-ion batteries, an essential part of an E-vehicle. That is why there is mention of the development of battery cell giga-factories in most nations’ plans.

Another thing to glance at is the components like copper and aluminium current collectors, polymer separators[1] and aluminium casings might look insignificant in the complex and hybrid production of lithium-ion batteries but are gravely relevant. A standard Lithium-ion NMC622 cell comprises 700 tons of battery-grade cooper and 300 tons of battery-grade aluminium current collectors. The requirement for lithium is only 80 tonnes. After cathodes, polymer separators are the second most expensive component of lithium-ion batteries. The potential for the generation of jobs is immense in the midstream and ancillary industry of Lithium-ion batteries compared to the automated giga-factories.

Strategies and Scope of India in Lithium-ion Batteries manufacturing

To enable the growth of the midstream and ancillary industry of Lithium-ion batteries. India has to take strategic steps to make its mark in the global value chain. India has to implement modern-tech driven methods like:

Partnerships are crucial in manufacturing. India’s neutrality can work in its favour to create trade pacts with other countries. For example, Australia and India Comprehensive Economic Cooperation Agreement, which was signed this year, has given hope to the Lithium-ion batteries manufacturers as the former is rich in raw materials, and the latter is willing to tap into its manufacturing potential.

Consistent upskilling of Human Resources on Lithium-ion Batteries technology:
The human element remains one of the most integral parts of a business. And to prosper in an industry like manufacturing lithium-ion batteries that adhere to innovation, it’s necessary to train and mentor a workforce filled with dynamic, well-informed and intelligent individuals.

Meticulous quality check of Lithium-ion Batteries manufactured:
When the product is of such relevance, the quality remains non-negotiable. Lithium-ion batteries are planted in EV vehicles and invertors. Negligence and cost-cutting can cost a human life.

Implementing IT solutions in the manufacturing of Lithium-ion Batteries: Employ IT professionals to develop tools to track and manage supply chains of the batteries and design efficient production lines of Lithium-ion batteries to optimize costs.

India has an abundance of ore in Karnataka. Only lithium carbonate needs to be imported to produce Lithium-ion batteries. The government has signed separate MOUs with Argentina and Bolivia to ensure a consistent supply of Lithium compounds. The already established chemical industry in India can be employed to make intermediates required for organic solvents. India possesses raw materials that can be used as an alternative instead of cobalt and nickel, which are more expensive. The demand for Lithium-ion battery cells is ever-growing as it is used in Electronic Vehicles like cars, scooters and rickshaws. It is also used in stationery appliances like invertors and solar and wind energy storage.

It might be premature to talk about India’s potential in an industry that has not even fully blossomed, but the emergence of an EV-based sector is inevitable. The potential Lithium-ion batteries offer remains too significant to ignore. India is yet to capitalize on its demographic dividend, and the manufacturing industry has the potential to employ a large workforce which remains unemployed. Until now, Indian manufacturing excellence has been in pockets and still has a long way to go to compete in the global ring, but the strategic planning can now pay compound dividends in the future. The first-mover advantage is not limited to chess.

Read our Article:What is the Procedure to Avail Battery Import License?

Role and Duties of PRO under E...

E-waste management is a significant challenge for governments of many developing countries, including India. This i...

How to set up Plastic Scrap Bu...

Plastic is one of the most popular raw materials that is used by the majority of people in the world. It is an inex...