Guide on Permissible expenses can be charged to RERA Account 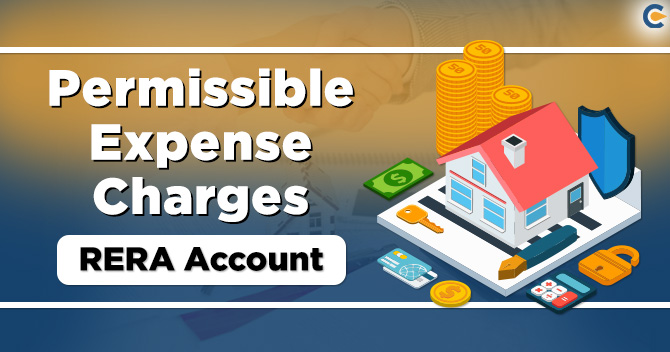 According to section 4(2) (I) D), every Promoter requires to open RERA account in a scheduled bank in order to cover the cost of construction and land cost of the project. The withdrawal from this RERA accounts must be in accordance with acts, rules, and regulations as may be prescribed. Only certain expenses can be charged from a designated bank account.

In the macro sense, only a cost of land and a cost of on-site construction can be charged to the designated account. The basic principle behind this is only actual out-flows can be charged from the account, not notional values or any future payments. Marketing or Advertising costs and the loan repayment or interest payments to the financial institutions are not permissible to be charged against 70% of the designated bank account.

Details on Expenses which can be charged to RERA account

The actual amount paid for land at the time of purchase (not current notional value, even though this can be used for fixing the price of apartments). If the land is ancestral or is received as inheritance or gift, then the permissible charge to the designated bank account will be nil. In case when a landowner is someone other than the Promoter, amounts paid to an owner of the land are permissible.

If payments are made in two installments, then the charge to the designated bank account can be made as to when the payments are actually made. Stamp duty, RERA Registration costs, and legal fees actually paid for such transactions must also be charged. Amount paid for diversion, or additional FAR is permissible.

Fees paid to the Statutory Authority to obtain project approval or registration (such as fees paid to RERA, Town & Country Planning Department, Municipal/Local Authority, or Panchayat) can be charged to the account. Fees that are paid to Architect or Structural Engineer or Technical Consultant are permissible but provided these must be specifically for this project. These experts must not be salaried employees of the Promoter. Only that fees which are directly attributable to the project are permissible.

Only those payments which are directly related to construction are permissible. Such as the cost of bringing water and electricity to a project site is permissible. The depreciation cost of machinery and equipment as used on the project site. The hire and maintenance charges for the same are also permissible.

The consumables, such as diesel, three lubricants, etc. and electricity to run the equipment is also permissible. The cost of material actually purchased and the cost of project-related labor actually paid (excluding the cost of salaries of employees in the company) are permissible to be charged to a designated bank account.

Every Promoter must have to make an application to the Regulatory Authority for the registration of a real estate project in the state. The Promoter, in addition to several other necessary documents, must have to submit the declaration, which is supported by an affidavit. It states that 70 % of the amount realized for the real estate project from the buyers time to time, must be deposited in a separate RERA account that is to be maintained by a scheduled bank to cover a cost of construction and a land cost must be used only for that purpose.

To some extent, maintenance of a separate RERA account is important as the withdrawals from which will be easily tracked. Thus it leads to raise better fund management and presumably no diversion of the funds. A developer can now be forced to use the project accruals for the development of the same project.

Read our article: Fees levied by RERA Punjab on agents and promoters

Not an escrow but a separate

The RERA Act says that the account has to be self-maintained and must not an escrow account. It requires the approval of the Authority for withdrawal. According to the RERA Act, the Promoter has to maintain a ‘separate RERA account’ for every project undertaken wherein 70 % of the money received from the buyers must be deposited in that account. Such funds can be used for the purposes of construction and land cost, and that fund can be maintained with any scheduled bank. In RERA, escrow and separate bank accounts do not mean one and the same thing.

The withdrawal from the separate RERA account must have to be in proportion to the percentage of completion of the project. It must be certified by an architect, an engineer, and a chartered accountant that certain withdrawal is made in proportion to a percentage of completion of the project. It is necessary if there is transparency, and transactions in such separate RERA account are made accessible to customers of a project online, if not to public at large.

The cost of land and a cost of on-site construction can be charged to the designated bank account. The principle behind this is that only the actual out-flows must be charged to the account, not notional values or future payments. In the real estate sector, the diversion of funds by the builders into different projects or for buying new land was not good. It resulted on failure in the timely completion of projects for lack of funds and a delay in possession of homes, even after paying the money on time by the buyers.

RERA Delhi: How to Register Re...

The Real Estate Regulation & Development Act 2016 has received the assent from the President on 25 Mar 2016, an...

Guide on RERA Registration for...

A "Real estate agent" is an individual who acts on behalf of someone else in a real estate transaction, and is prof...