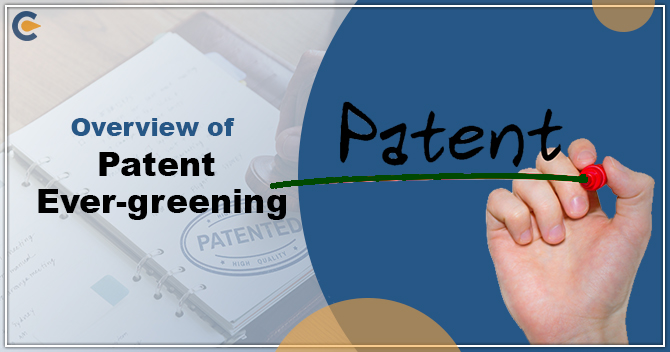 A patent is a set of monopoly right that a Sovereign State grants to an inventor or the assignee for a fixed time period in exchange for the patentee to permit public disclosure of his new, useful and non-obvious product or process invention. The purpose of providing exclusive right to the patentee is to prevent others from using, making, distributing or selling the patented invention without consent. Patent Ever-greening is a legal, corporate and technological business strategy for extending the time period of the term of the granted patent which is about to expire. So, continue to read further to get an overview of Patent Ever-greening from this article.

What is Patent Ever-greening?

Patent ever-greening is potentially a term usually referring about the strategy to obtain multiple patent Registration that will cover various aspects of the same product, normally by procuring patents on enhanced version of an existing product. In simple words, patent ever-greening means gaining more advantages for a longer time period.  Patents are granted for a maximum time period of 20 years and after its expiry period the invention goes into the public domain which makes it free for manufacture, use, import or sell. Though, sometimes the patentee’s mostly the pharmaceutical companies often tries to extend this exclusive right beyond the fixed time period of 20 years. These companies make trivial variation to the existing patented invention as soon as the time period of the patent is about to end and then file for a new patent with the objective to extend their monopoly and maintain the market dominance this is known as Patent Ever-greening.

What is the purpose of Patent Ever-greening?

The pharmaceutical firms practice patent ever-greening whereby they extend the drug’s patent life by obtaining further 20-year patents for minor modification or other reformulation of the drug, without essentially increasing its therapeutic efficacy. The purpose behind this is as given below:

It is important to have check on the patent ever-greening as these pharma companies misuse it and it acts against the interest of the public as because these drugs become costlier and difficult for the general public to afford.

Once the patent expires, the generic product gets available in the marketplace. With all these generic products from various companies, it sets in the competition in the market. This automatically results in the falling down of the price of the product. Hence, Patent ever-greening does not allow the price of a product to lower down due to the reason of extension of the monopoly of the patentee’s invention.

Section 3(d) of the Patent Act, 1970 states that on simple discovery of any new form of the known substance where the outcome is not resulting in improvement of the known efficiency of that substance or the simple discovery of any novel property or fresh use for any known substance or of the utilization of any known process, apparatus or machine unless the consequence of that known process gives the outcome to a new product or employs at least one new reactant will not be patentable under the Indian Patent Act.

On the other hand, the affirmative aspect of blocking the patent ever-greening is that it will bring relief for all the poor patients who are dependent on the various life-saving drugs. It also assists in maintaining the price of these essential drugs which must be within the reach of common people in all the underdeveloped and developing countries.

A Balance approach between Patents and the Patients

Just knowing the problems caused by the stringent patent laws or Patent ever-greening is not enough because it is equally imperative to lay down a solution for this problem. The need is to make a balanced approach between the patent laws and its extension while at the same time keeping a low price for the patented drugs, so as to make it affordable for the common people of India to avail the essential drugs. The ways that are helpful in reducing the price of patented drugs are as follows:

The non-patent holders are granted the permission to manufacture that drug by providing them with the compulsory licensing. In this manner, the prices of these drugs even on being patented are still maintained low and they are even available and affordable for the poor section of the general public.

The government is supposed to make sure that proper health care is made available to every section of the society. As in India there are serious problems like inadequate healthcare facilities and low income. The ordinary man has very restricted access to the basic essential drugs and patent of the drugs is not even an important matter. Even if the patent of the drug is not there, still the chances of access to such essential drugs is very less. Therefore, the government[1] must ensure access to the basic health facility.

Patent ever-greening stimulates the development of an unfair means of competition in the market and such other related abuses. There is an urgent need for the developing countries to foster and develop efficient mechanism to counter the ever-greening practices of the innovators. As because it is equally important to encourage the innovation for the big companies and at the same time respect the efforts of the generic companies so that an equal balanced approach is taken that shall be beneficial for the masses.

Patents, among other intellectual property rights, are one that takes a relatively long time to secure. The first q...

Is it Possible to Increase the...

A patent is a form of intellectual property that provides legal coverage to the owner’s invention against the act...