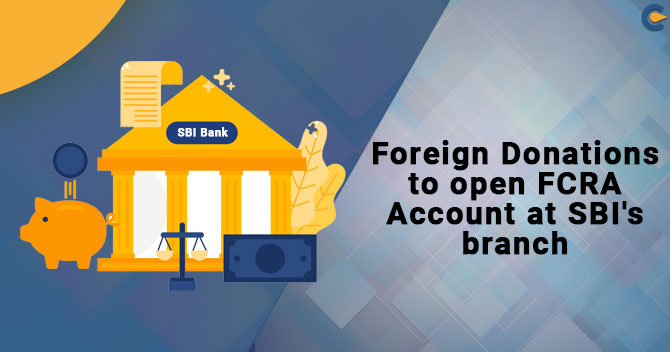 NGOs now have to open and maintain a FCRA account in (SBI) State Bank of India’s New Delhi main branch at Sansad Marg, in order to receive all foreign contributions exclusively. It must compulsory required by a NGOs to open FCRA account by 31st March 2021.

NGOs to open FCRA Account by 2021 after an Amendment

The Foreign Contribution (Regulation) Act, 2020 (FCRA) was amended by Parliament in the month of September. The new provision makes it mandatory for all non-government organisations (NGOs) and associations to receive foreign funds in a designated bank account at SBI’s New Delhi branch.

The FCRA Act, first enacted in 1976 was amended in year 2010 in order to take the new measures by the Home Ministry to regulate foreign donations. However, again the Lok Sabha passed Foreign Contribution (Regulation) Amendment Bill, 2020 on 21 September with some new changes. The order specifying the process of opening the FCRA bank account was issued by the Ministry of Home Affairs. Presently, there are 22,434 such NGOs and associations active under the FCRA.

Read our article:What is the process to get FCRA registration?

Overall Voting by Show of Hand...

Voting by show of hands shows the gestures of voting that is a cast for any resolution where the members put on the...