How to get easily a Name Change Affidavit in India? 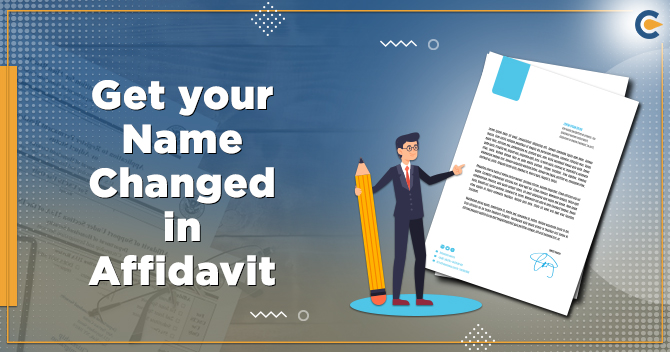 There are numerous reasons to make changes in the name, for instances, individual inclination, and change in the religion, marriage, modification or alteration of the names as a result on an advice of numerological experts.

Making changes in name can also mean adding the word to a current name, making changes in spelling, change in the surname and so forth. The only condition applicable for an eligibility to file name change affidavit is that an applicant requires being 18 years of age to make changes in one’s own name.

There are various types of name change affidavit. Affidavits can be utilized according to each applicant’s purpose, which are written below:-

One Person many names Affidavit

This type of affidavit is considered as the multi-name affidavit. It occupies applicant who has diverse names within the documents, and need to offer evidence that each of names belongs to the same and one single person only.

The affidavit is used legally make changes in a name in each document and also for publishing the notification in the Gazette of India.

The affidavit can be used of by the woman applicant looking for the changes in their last name after marriage and then the same get published in other types of documents.

Read our article:Detailed Process of LLP Name Change in India

Procedure for Name Change in India

Firstly, the Name change Affidavit submission and then an announcement published in the newspaper and a notification published in the Gazette of India. The name change procedure involves following steps. Also an applicant required to submit certain documents attested by the Judicial Magistrate/Notary.

Make an affidavit and this affidavit must include details such as the old name, proposed new name, the reason for name change (marriage, legal, numerology, etc) and address. Print an affidavit on a stamp paper and get it duly signed by two witnesses. Visit notary to notarize the affidavit.

Step 2: To Place an Advertisement

Afterwards, you need to publish an advertisement about a name change in any local and any national newspaper. A sample of the advertisement has to be attached in the files section.

How to Create a Name Correction Affidavit?

The name change has a three stage procedure to change name that can be done in less time if it is carried out reasonably. The well known essentential step towards the procedure for preparing of an affidavit for change of name. Initially, one has have to create an affidavit and swear in front of a magistrate or a notary. One must print it on a relevant non-judicial stamp paper for name change affidavit.

Sometimes it might be difficult to take appointment from a magistrate, one can contact a notary to get signature, which is similarly valid. Take out the print of the content on a stamp paper of the needed value and have it being sealed by a notary. The employees of the central government can submit the deed for name change in accordance with the “OM No. 190016/1/87-Estt -12.03.1987″ of the Ministry of Home Affairs, .

The deed require to be written on a plain paper being signed and stamped with rubber stamp by two witnesses having the rank of a gazetted officer of a similar department. However, Indians who are living abroad, they can submit the deed which is attested duly by a respective Indian High Commission or Indian Embassy. It is the most important phase with regard to the procedure of name change.

Publishing in the News Paper

Newspaper advertisement is a part of the procedure. The advertisement goes out in one national newspaper[1]. Also, its recommended to retain copies of a published newspaper for future reference. After notarization of an affidavit for name difference, the following step to make publication of the name change in 2 local newspapers.

Publishing in the State Gazette

In a few states, one the change in name being published within the official gazette of the state. It is not a statutory prerequisite in terms of few states. Central Gazette is a better option to publish your name change advertisement and for government employees, it is a mandatory step.

For example, in Karnataka, the publication of the gazette with regard to changes in name is applicable is only to the government employees of the state. You must contact the publication controller of the governmental press within the state and have details on the process. One need to create certain essential records alongside an original affidavit for name correction to have details being published in the next following issue of a gazette.

Making changes in the original name is now considered to be very common and is seen throughout India. However, people may not know aware of the options which are available so they think that the procedure for name change is just tiresome and tedious. In fact, name change is not that bothersome, especially when Corpbiz professionals are around.

Read our article:Change in the Name of the Company: Step by Step Procedure

Conversion of Debentures into...

In a simple sense, the Conversion of Debentures into Equity Shares means to change the loan liability into a capita...

Functions of a Company Secreta...