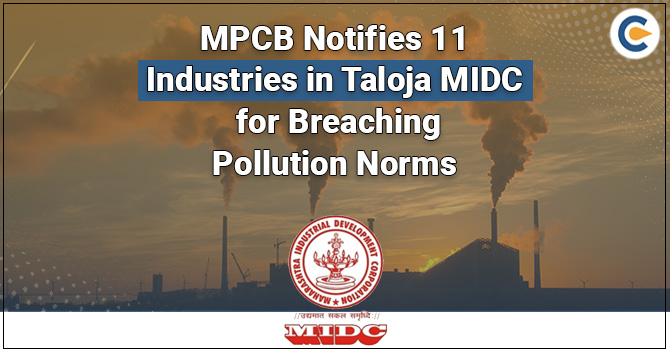 Maharashtra Pollution Control Board has notified 11 industries operating in Taloja MIDC zone for breaching pollution norms. The notification came to the effect following a concern raised by the PCMC corporator.

What is the concern of the complainant?

According to the complainant, some of the industries operating in the Taloja MIDC zone were emitting excessive pollutants, mainly in the form of chemicals and gases. The situation has gone worst as such pollutants are endangering the health of residents of the Kharghar and Taloja. MPCB has a dedicated vigilance squad that regularly inspects industrial units operating in Taloja MIDC Zone. The inspection is usually carried out at night since most industries remain operational in the dark.

How does MPCB react to the complainant’s concern?

As per the deputy regional officer of MPCB, the relevant measures have been taken by the authority against the defaulters allegedly undermining pollution norms. The officer further confirmed that the authority has also distributed showcause notices to the following from Oct 16, 2020, to Nov 29, 2021.

The actions will be formulated in accordance with the promises received from the respective industries. Adkar also added that soon after confronting the appellant’s concern, the MPCB had conducted the meeting with the Taloja Manufacturing Association on Oct 11, 2021.

Due to the swift growth of industries in India and other nations as a result of economic development has escalated air pollution to a considerable extent. India has emerged as the prominent manufacturing hub for various international entities. The repercussion of air pollution emitted by the chemical sector has resulted in compromised quality air in India and other nations.

Read our Article:How to Get NOC from State Pollution Control Board?

Consent to Establish and Conse...