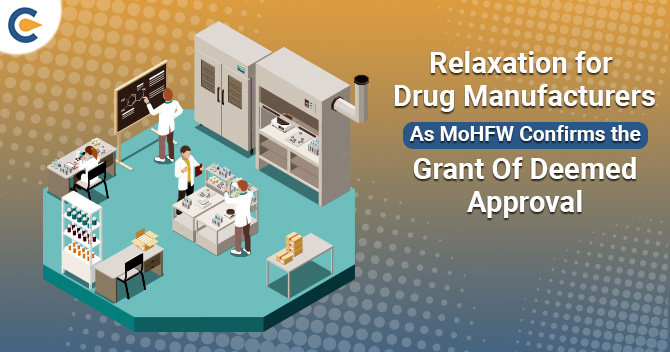 Through the latest gazette notification, the GOI has added a provision related to the deemed approval of a license to produce the drug for examination, analysis or test, if the concerned authority does not respond in 7 working days from the date of receipt of the form (application). This decision came to effect to get rid of the hardship in securing the manufacturing license for the sake of testing, examination, or analysis. Previously, the medical dialogues team had announced that the MoHFW, i.e. Ministry of Health and Family Welfare, has shared a notification that seeks to amend the Drug Rules, 1945, notifying that the concerned authority may accord the licence in form 29 within seven days of the receiving the application in form 30. Further, the notification confirmed that the applicant shall receive the deemed approval of the said authority doesn’t respond in seven working days,

An applicant seeking the said license needs to apply in form 30. Once secured, the license will remain valid for one year.

Previously, it was communicated that the draft rules would be taken into account on or after the expiration of 30 days time span from the date on which the certified copies of the said rules are made available to the masses for inviting suggestions.

The latest notification clarified that the suggestions or objections received from the masses on the said rules had been taken into account by Central Government.

After in-depth deliberation, MoHFW has shared the gazette notification in the purview of the power granted by Section 12 and 33 of the Drugs & Cosmetic Act, 1940 (23 of 1940), the central ministry, after consultation with the Drug Technical Advisory Board.

Here’s what Gazette Notification stated about the above matter

In the purview of the above amendment, the following sub-rule shall be inserted, namely:-

The license in Form-29 may be accorded by the concerned authority within a period of seven working days from the date of receipt of the prescribed application, i.e. Form 30, & in the case where no intimation is given to the applicant from the authority’s end within the said time span, the authority shall be deemed to have accorded the license.

If the inspecting officer finds everything in line with the underlying compliances, the authority will grant the drug license.

What is the role of MoHFW?

MoHFW stands for Ministry of Health and Family Welfare[1]. It is a government ministry vested with the right to implement several programs nationwide in health and family welfare and incentivise conventional & indigenous systems of medicines. The Minister of Health & Family Welfare reserves cabinet rank as a member of the Council of Ministers.

Department of Health and Family Welfare

The Department of Health handles task related to health care and public health. It also plays a vital role in launching awareness campaigns regarding immunisation and preventive medicine.

The Department of Family Welfare is vested with the responsibility to oversee the areas like family welfare, paediatrics, maternal health, education and communication. Moreover, it also seeks to set up coordination with NGOs and international aid groups

The said notification from MoHFW came as a relief for drug producers who were grappling to secure authority’s consent for testing drugs. The notification confirms that manufacturers will continue to produce drugs for analysis and testing through deemed approval. This enables them to skip the tedious process of license procurement.

Read our article:How to get a Manufacturing License of Drugs in India?

Punishment for Selling of Medi...

The Drug License Process in India is simple yet a lengthy process. To start a business of the pharmaceutical busine...