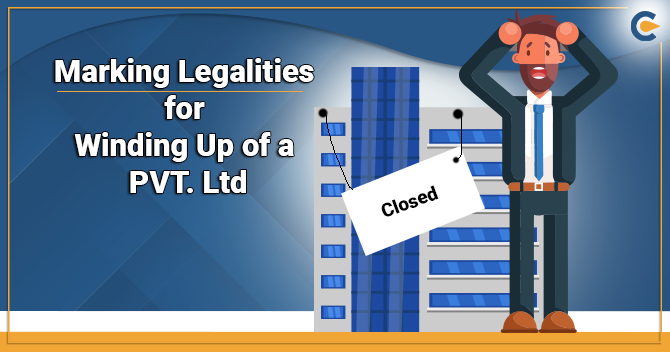 Closure of a registered establishment in India has to be done through a legal procedure. This write-up consolidates four ways through which a private limited Company can be closed.

Sell Out of an Entity – A Way of Voluntary Winding Up

Transferring the ownership of the Private Limited Company to another entity is also a form of voluntary winding up. It can be accomplished by selling shares against the predetermined price. Practically, selling off a company through share transactions cannot be deemed as a winding-up method by the virtue of the prevailing bylaws.

What is Mandatory Winding up of an Entity?

Any registered organization in India under the purview of the Companies Act, which is found to be guilty of breaking laws, has to face the compulsory winding up as ordered by the Tribunal.

Procedure Relating to Mandatory Winding Up

Following instructions can be followed for the Mandatory Winding Up of a Private Limited Company:-

The petition filing will be done by the following:-

Form WIN 1 or WIN 2 is generally used for the petition filing. The applicants are required to submit the said Form in triplicate. Before petition filing, the applicant must arrange an affidavit in Form WIN 3 which will go along with the same.

Attach the Petition with Statement of Affairs of Company

All the documents annexed with the petition should be audited and verified by a practicing CA. Form WIN 4 in duplicate must be filed for providing a statement of affairs. The same must be verified by an affidavit in Form WIN 5.

Advertising the Petition for 14 days

The Company must publicly share the petition in a preferred language via a daily journal for 14 days. To serve this purpose, the Company has to leverage the Form 6.

Proceedings of the Tribunal

The Tribunal will hear the petition on the hearing date; accept replies & objections from the petitioner as well as respondent. The Tribunal may appoint a provisional liquidator during the legal proceeding.

If the Tribunal fails to spot an error in account or compliance requirement, the Tribunal will issue the Company’s dissolution order within 60 days of receiving the application. After this, the registrar will issue a notification in the Official Gazette specifying that such a Company is dissolved.

What is the Voluntary Winding Up?

The winding-up in such cases starts Form the date of passing of resolutions cited above. The Company is also required to appoint a liquidator in the same meeting. The appointment of Liquidator seeks the approval of all the creditors of the Company.

The aforesaid procedures shall be filed in a standard form & even after the firm gets wind up; its name cannot be taken by other applicants for 2 years. The format regarding various forms and winding-up procedures is mentioned under the Companies (Winding-up) Rules, 2020.

Winding Up of a Defunct Company as per Company Act, 2013

In light of the Companies Act, 2013, a Defunct Company refers to an entity that has gained the Dormant Company’s status. Since these institutions lack fiscal accessibility of any kind, the Indian Government renders certain relaxation in this regard.

The Companies Act, 2013[1] provides Defunct Company with the legal procedure of Winding up. For that, such entities are supposed to file an application in the Form known as STK-2 Form with the Registrar of Companies. The winding-up cannot be possible without the consent of the Companies’ directors and board members.

For the purpose of the said scheme, a defunct company is known as an entity that has:

A company may wind up its affairs if it is finding it hard to carry on its business, or if it was established only for a specific purpose, or if it fails to meet its financial obligation. It is evident from the above that a private limited company’s winding up is not a straightforward process. There is a lot of legal complicacies involve in the winding-up process.

Read our article:Difference between Winding up & Striking off a Company in India

Process to close a Private Lim...

Running a business isn't a straightforward undertaking as it revolves around a number of unseen challenges. Series...

Closing of Nidhi Company; A De...