What is the Legal Rights Available for Payee in Cheque Bounce Cases? 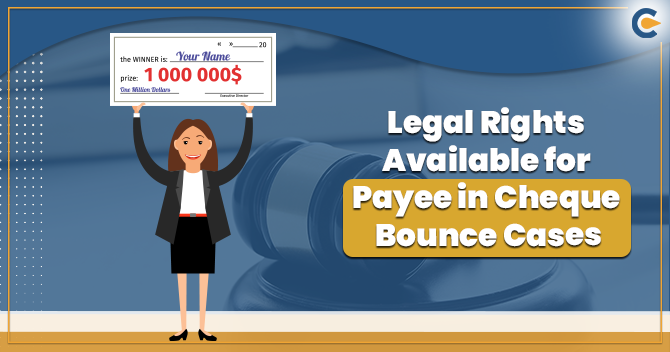 A cheque is a negotiable instrument and used in various transactions likewise the repayment of loans, payment for salary, bills and fees, etc. It is an instrument/exchange bill drawn on a specific Bank which is payable only on demand.

A crossed or AC payee/account payee cheque is not negotiable by anyone other than the payee himself/herself. The cheque has to be deposited in the payee’s Bank account. When a cheque is returned by the bank unpaid, it will be considered as a matter of cheque bounce cases and It will be covered u/s 138 of N.I Act 1881.

What is Cheque Bounce?

When a cheque is returned by the Bank unpaid, it is called rejected or bounced. Cheque bounce can occur due to many reasons like insufficient funds, etc. When the cheque bounces for the first time, the Bank issues a ‘Cheque Return Memo’ along with the reasons for non-payment.

There can be many grounds which lead to the bouncing of a cheque or it being dishonoured when submitted for payment to a Bank, some of which are mentioned below;

The following are the legal rights available under the Negotiable Instrument Act, 1881 for the cheque bounce cases.

Resubmission of the Cheque

The payee is informed by his Bank about the bouncing of the cheque through the issue of a ‘cheque return memo’. It contains the reasons for non-payment of the money stated in the cheque. For a person to make a valid claim such a person must ensure that they submit the cheque to the Bank within 3 months from its date of issue; otherwise, the cheque would expire.

Legal Notice can be issued in Cheque Bounce Cases

The first step that must be taken by you in case of cheque bounce is the sending legal notice to a drawer demanding your rightful payment, non-fulfillment which will lead you to knock the doors of the Court. A legal notice must be sent as soon as possible and within a period of 15 days from the date of intimation from the Bank that the cheque has been bounced.

Civil Suit can be filed in Cheque Bounce Case

In the stage of cheque bounced or unpaid cheque, the drawee of such cheque has an option to file a civil case against the defaulter of such payments so as to recover such amount from him. A civil suit helps in recovering the unpaid or due amount of the drawee along with his legal expenses for the same suit. In case of a small amount, the civil suit can be filed under Order 37 (of the Civil Procedure Code) to recover the amount in such cases.

Criminal Suit u/s 420 of the Indian Penal Code, 1860 can be filed in Cheque Bounce Case

In serious cases where the mentioned amount on the cheque is huge and where it applies, a criminal complaint about cheating could also be filed under section 420 of the Indian Penal Code[1]. A complaint made under the said Code will be treated as a criminal case and punishment could be conferred likewise the imprisonment or fine or both.

Cheque bounce is a punishable offense under Negotiable Instruments Act, 1881. Section 138 of the NI Act deals with the punishment of cheque bounce where dishonesty is caused either by insufficiency of the amount or by the amount mentioned in the cheque which exceeds the amount is in account.

Before issung a cheque please ensures that your account should be active & have sufficient funds. Kindly associate with the Corpbiz expert to know more about the legal rights available in cheque bounce cases.

Read our article:How to Send a Legal Notice for Cheque Bounce?

Is a Dishonoured Cheque Qualif...

As per the section 138 of N.I ACT, 1881 shows criminal effect in the event of dishonour of cheque. Police have the...

In this fast-growing world, the business has a vital role to play. With the development of business practices, diff...