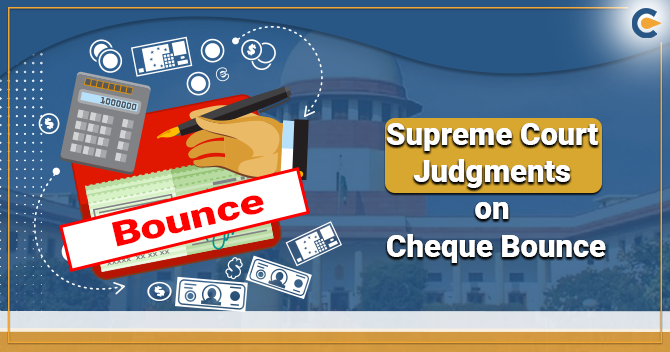 In this fast-growing world, the business has a vital role to play. With the development of business practices, different modes of financial transactions are also arising.

Negotiable Instruments has introduced different methods compatible with trading methods that diverge from the traditional process of transferring cash through the exchange of goods and services. With the introduction of the Negotiable Instruments Act, 1881[1], the transaction process has become more comfortable and more straightforward than before.

Chapter XVII of the Act contains sections 138 to 142, which plays a role in providing credibility to negotiable instruments used to advance trade negotiations and establish confidence in the power of banking-related operations.

Discussed below are the case laws relating to cheque bounce section 138 of the NI Act.

In Case of M/s Meter & Instruments Private Limited & Anr versus Kanchan Mehta (2017), the Supreme Court discussed the object attached to Section 138 and other statutory provisions set out in Chapter XVII of the Negotiable Instruments Act, 1881 and on the basis of that passed its judgement

Under Section 138 of the Act, the complainant, Kanchan Mehta, had lodged a complaint against the plaintiff on the ground that both of them had failed to pay the former amount on monthly basis as per the existing agreement. The company provided the complainant a cheque from which his legal liabilities were discharged. The same cheque returned unpaid by the bank due to insufficient funds in drawer account.

While delivering a judgment, the Supreme Court said that whatever offences set out in Section 138 is civil by nature. In addition, the provision for conciliatory violations exists in the Negotiable Instruments (Amendment and Miscellaneous Provisions Act), 2002 requires the consent of both parties.

In respect of this case, as the company was prepared to pay compensation to the complainant, the court thought of discharging the accused for the fair distribution of justice and, compensated the complainant with the amount required to be provided

SC on Rebuttal by Accused against Presumption in Cheque Bounce Cases

In respect of this case, the Division Bench of the Supreme Court has deliberated on two legal motions.

In the case, the appellant challenged the High Court order, under which the Court, exercising amendment jurisdiction, set aside the conviction order against respondent under section 138 of the N.I Act.

During the trial, the appellant examined the witnesses and produced documentary evidence to prove the respondent’s offence u/s 138 of the NI Act. However, the defendant did not have any oral or documentary evidence in the case. The trial court presumed against the accused under section 139 of the Act, 1881. The accused failed to reapply the presumption by leading any evidence on its behalf. Therefore, the trial court convicted the defendant u / section 138 NI Act.

Aggrieved with the trial court’s order, the defendants filed a criminal revision in the High Court. The High Court has allowed the amendment to separate the conviction order from the applicable judgment.

The High Court held that the accused had succeeded in creating doubt in the court’s mind regarding the existence of debt or liability. Aggrieved with the decision of the High Court, the appellant approached the Supreme Court.

In the case, the Supreme Court ruled in favour of the appellant and set aside the High Court order. The apex court deliberated on two essential below stated points:

Role of Bank In case of Forged Signature on the Cheque

The bank has the right to stop the payment if there is any counterfeit on the cheque. The bank may take immediate action on such acts.

In the case, the Supreme Court said that “When a cheque presented for encashment has a forged signature, the bank has no right to pay against such cheque.

In respect of this case, bench of two judges of the Supreme Court held that the offence under Section 138 of the NI Act could only be committed with the conclusion of several acts. However, this decision was overruled by Supreme Court’s decision in the Dashrath Roop Singh case.

The director of a company can be held liable for acts performed by its employee irrespective of the fact whether they were aware or not.

Inadequacy of funds at the time of issuing a cheque does not by itself infer dishonesty in issuing cheque.

The managing director of the accused company was convicted under section 138 of the NI Act despite his plea that he did not participate in the day-to-day administration of the company and was not aware of its affairs.

Section 138 of the Act imposes strict liability towards the default of payment and is, therefore, an essential weapon for regulating the Act. As per the N.I Act, 1881, a lot of steps are being taken towards development. The number of cases related to the dishonour of cheques is coming before to the court.

When it comes to commercial disputes in our country, the redress of injustice has become a severe issue and a lot of payees have got compensatory amounts over a stipulated time period. Kindly Connect with the Corpbiz expert to know more about the Supreme Court critical judgments on cheque bounce (section 138) under rule of Act.

Read our article: How to Send a Legal Notice for Cheque Bounce?

Name of Independent Director i...

MCA has stretch out the timeline for the inclusion of Name of Independent director in Data bank. The Ministry of Co...