GST Returns Reflecting in your Income Tax Passbook (Form 26AS) 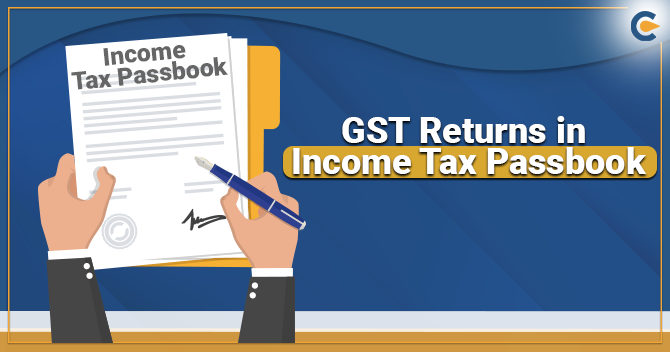 As a business proprietor and a taxpayer, the tax payer has to declare in their GST returns in his income tax passbook regarding the earnings received from carrying out the business transactions.

GST return is a document that will comprise of all the details in the income tax passbook regarding sales, purchases, tax accrued on sales also called output tax and tax paid on purchase known as input tax. Once the GST is filed then the tax payer needs to pay the ensuing tax liability i.e. money owe to the government.

Form 26AS is generated by the Income Tax Department and it is an annual consolidated tax statement. This form functions like the ‘Annual Tax Credit Statement’ which releases the tax credit details of the existing taxpayer on Permanent Account Number (PAN) basis according to the database of the Income-tax Department.

Purpose of Form 26AS

The purpose of Form 26 AS serves the following aspects, which are as follows:-

It was detected by the revenue department that although the turnover of crores of rupees in GST is shown but those people are still not paying income tax. Therefore, it was decided that with effect from June 1, 2020, a new format for the Form 26AS will improve the flow of information between the tax authority and the taxpayer and also help the taxpayers to calculate the correct tax liability and file the Income Tax Return (ITR).

Few of the changes includes:-

The CBDT (Central Board of Direct Taxes) has introduced Form 26AS with few amendments in a new format.

These amends for GST Returns to reflect in Income Tax Passbook will ease the GST turnover reporting in the Income Tax Return GST Schedule. Thus, it will also be seen as a significant step focusing on the “Transparent Taxation” thereby honouring the honest taxpayers.

Also there will not be any extra compliance burden on the taxpayers for GST turnover displayed in the Form 26AS in the income tax passbook. Now, this will be an annual consolidated tax statement that can be accessed by the taxpayers using their Permanent Account Number (PAN) from the income-tax website. Therefore, the information in the Form 26AS would afford an ease to the taxpayers in complying and filing the GST return in Income Tax Passbook.

Read our article:16 Types of GST Return your Business should be Aware of!

The purpose behind enacting Anti-Profiteering Measures under GST was to restrict entities from earning huge profits...

How to Use SMS Facility for th...

Are you having issues in conventionally filing the GSTR-3B? Well, you can now use the SMS facility to serve the sam...