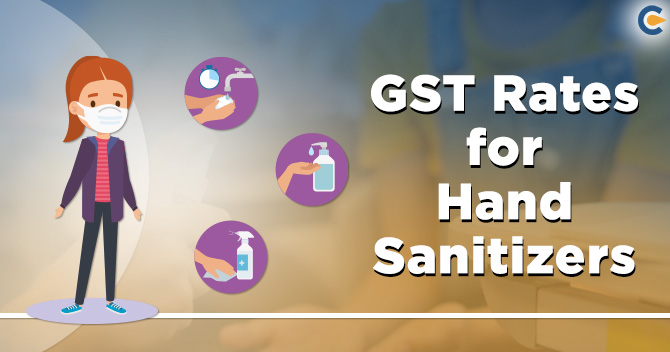 Finance Ministry clarified that hand sanitizers would attract a standard duty rate of 18% under the GST regime as they come in the category of disinfectants like anti-bacterial liquids, soaps, Dettol, etc. According to Finance Minister, reduction in GST rate would help neither manufacturers nor consumers after receiving comments on the GST rates for essential items like Hand wash and sanitizers – following the Goa bench AAR ruling.

While maintaining the classification as an essential commodity cannot be a criterion for exemption from GST, the alcohol-based hygiene product will attract 18 percent GST. It was held by the Goa bench of the GST Authority of Advance Ruling (AAR).

Observation of the Case

On the request & over-classification of the hand sanitizer, and the applicable rate of GST, the “Spring-fields (India) Distilleries” had moved Goa Bench Authority of Advance Ruling. As the Ministry of Consumer Affairs has classified hand sanitizers as an essential commodity, they have sought a judgment on “whether it will be exempt from GST, or not.”

“The various packing materials chemicals, and input services, etc. also attract a GST rate of 18%. Those are also used for the manufacture of hand sanitizers. The Government has also clarified that falling down the GST rate on sanitizers and other similar matters would lead to an inverted duty format and place the domestic manufacturers at difficulties as well as the importers of hand sanitizers too”. If domestic manufacturing suffers on account of an inverted duty structure, consumers would also eventually not benefit from the lower GST rate, the Government clarified.

The CBIC (Central Board of Indirect Taxes and Customs) has issued a clarification on GST (Goods and Services Tax) on “Hand Sanitizers.” The issue has been reported in a few media sections of the GST rate on alcohol-based hand sanitizers.

The GST Council decides the GST rates on various items. However, all the state governments and the Central Government together deliberate and take conclusions. It is further clarified that inputs for hand sanitizers’ manufacture attract a GST rate of 18%, which chemicals include packing material & input services.  Moreover, it has been clarified that – Lower GST rates help imports by making them cheaper. Again, this is against the nation’s policy on “Atma Nirbhar Bharat.” If domestic manufacturing suffers on account of an inverted duty structure, consumers would sooner or later not benefit from the lower GST rate.

Read our article:Guide on Revocation of Cancellation of GST Registration

Synopsis of Arguments on raise of GST Rates for Hand Sanitizers

There are many arguments and questions raised after the raise in GST Rates for hand sanitizers. Few are stated below:-

Earlier, hand sanitizers were classified as medicinal preparation under “Medicinal and Toilet preparations (Excise Duties) Act, 1955[1]” according to the manufacturers, and excise duty was paid on it, therefore. These companies had been paying 12 percent GST, after the imposition of GST in 2017 as per the Medicaments category.

Unexpectedly, now they have to pay 18 percent GST as the GST department is telling us that Hand Sanitizers fall under the ‘disinfectant category.’ The manufacturers have been sending notices to companies condemning them of evading tax”

The GST department has started labeling them as tax evaders and is continually hitting notices instead of declaring sanitizer manufacturers as Corona warriors. In has been quoted by the Confederation of Indian Industry – Himachal’s Harish Aggarwal, Laghu Udyog Bharti Pharma Committee national president Rajesh Gupta and BBN Association chairman Sanjay Khurana; in their statements.

They also inserted a statement that there is no tax evasion issue as they charge 12 percent GST from customers and deposit the same with the government. They have questioned why the department did not raise objections when the companies have been filing a return at 12 percent GST since June 30, 2017, if they feel that these industries are committing folly by not paying 18 percent GST?

Moreover, the insecticides, anti-sprouting products, rodenticides, herbicides, fungicides, plant growth regulators are included in the category of “disinfectant,” which all are related to the products used for agriculture and horticulture. Therefore, the GST Department’s decision to classify hand sanitizers as “disinfectant” is irrational, highly ambiguous, and irrational. Unlike disinfectants used on the dead surfaces like soil or the plants, the alcohol-based hand sanitizers are destined to be used on the human body.

The more significant test may necessarily be around applicability on the institutions having GST registration. After due trial and discussion, the court held that “Sanitizers are disinfectants like anti-bacterial liquids, soaps, Dettol, etc., which all entice standard duty rate of 18% under the GST regime”.

Our CorpBiz legal group will be at your disposal if you want expert advice on any aspect of GST implications, registration or compliance, and any Government Licensing. We will help you to complete all your compliances concerning all the issues related to GST applicability-based as per your desired activities, ensuring the fruitful and well-timed completion of your work.

Know about the Taxation of Edu...

Educational institutions under GST are those institutions that provide services through education as a part of a vo...

It was a raised concern earlier this year over the directive of recovery of over Rs. 46,000 Crore of unpaid interes...