An Overview of FSSAI Regulation on Vegan Foods 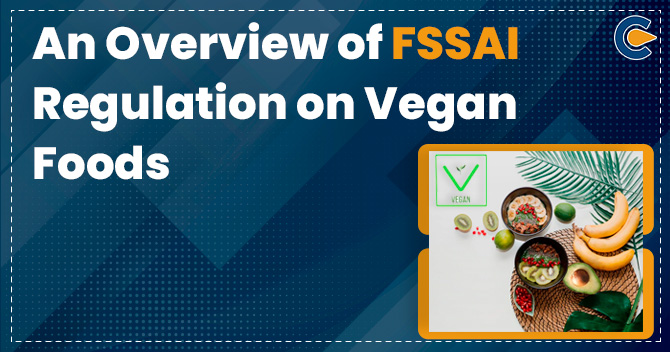 Vegan Foods Market is slowly gaining momentum in India and is growing very rapidly as people of our country are shifting to Vegan Foods. Even the restaurants are catering to Vegan Foods with growing consumer awareness of a healthy lifestyle. According to a survey, India is one of the leading Vegan Foods Market in the whole Asia Pacific Region. Furthermore, the food industries of our country are introducing a range of high-quality vegan products with various flavours to appeal to a broader consumer/customer base and support their market growth.

The notification published on 10th June 2022 by FASSAI is a Regulation on Vegan Foods. It is published under sub-section (1) of Section 92 of the Food Safety and Standards Act, 2006. This Regulation is published with effect to the notification of FSSAI dated 6th September 2021, inviting objections and suggestions from the public, especially from those who are likely to be affected before the expiry of sixty days from 8th September 2021, i.e., the day on which the copies of such notification was made available to the public.

The objections and suggestions received from people with respect to that notification and the same were considered by the Food Safety and Standards Authority of India (FSSAI). So, with prior approval of the Central Government, FSSAI made this Regulation related to Vegan Foods. However, the Regulation will come into effect from the date of its publication in the Official Gazette.

Labelling and Display under FSSAI Regulation on Vegan Foods

Labelling and display requirements are provided under the Vegan Foods Regulation of FASSAI. The seller of such food exclusively or as part of retail merchandise should store and display the vegan food in such a manner that it should be distinguishable from non-vegan food. Every vegan food package after the approval should carry a logo as specified in the Regulation, and in addition, all-vegan food should comply with packaging and labelling requirements specified under Food Safety Standards (Labelling and Display) Regulations, 2020. However, there are some exceptions as clause (b) of sub-regulation (4) of regulation 5 of the Food Safety Standards (Labelling and Display) Regulations, 2020.

A Food Business Operator should submit an application to the concerned licensing Authority with all necessary information/details in a format prescribed by Food Authority. The Food Authority may also specify some guidelines for approval of the vegan logo. No vegan food product should be imported without a certificate issued by recognised authorities of the exporting countries in a format as specified by the accepting authority.

FSSAI Regulation[1] on Vegan Food was published on 10th June 2022 under Section 92(1) of the Food Safety and Standard Act, 2006. It has mentioned the meaning of Vegan foods, including the general requirements for the manufacturer of such food products. This Regulation is applicable for all kinds of businesses of Vegan Food, its ingredients and products, from manufacture, packaging, sell to import. The Regulation also talks about the requirements that everyone who is in the business of vegan food is required to follow, such as no involvement in animal testing, compliance with relevant provisions, etc. The Regulation also gives Labelling and display requirements where it states that every package of Vegan Food should carry a logo as specified by it and also that every package should display the vegan food in a way that it should be distinguished from non-vegan food. There should be a Food Authority for issuing any necessary license and guidelines for approval of the vegan logo. No food should be imported without any Certificate issued by exporting country’s recognised Authority in a format specified by the Authority accepting the same.

What do you mean by Bureau of...

The Bureau of Indian Standards is the statutory organization which is working under the supervision of the Ministri...

An Overview on FSSAI Registrat...

Ever since the FSSAI Act, 2006 has enacted, the quality of the food items available at the FBOs has been improved s...