FSSAI Registration for Coconut Oil Manufacturers: Is it Mandatory? 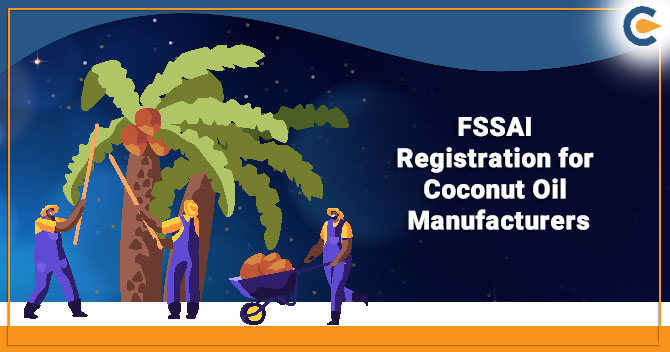 Coconut is a profitable cropthat is aggressively grown in more than 90 nations of the world. India is one the leading global producers of coconut, producing 13 billion nuts/annum. Every Coconut oil manufacturers in India need to comply with certain obligations to carry out their operation seamlessly. Obtaining FSSAI registration is one such requisite for these entities. In the blog, we will reveal some imperative points regarding the FSSAI registration for Coconut oil manufacturers.

An overview on Coconut plantation and Coconut oil production in India

Coconut is predominately planted incoastal areas such as Assam, AP, Kerala, Goa, Orissa, Maharashtra, Tripura, Tamil Nadu, West Bengal, Lakshadweep, Andaman, and the Nicobar Islands, and Pondicherry[1]. Despite the tedious plantation, coconut still considers the most valuable crop in India. This will lay down the growth foundation for the coconut oil manufacturing business.

In Indian culture, coconuts adhere to a significant position in terms of religious sentiment. At present, our nation holds the third position in the list of leading coconut producers in the world. Theproduction of coconut in India is almost 9.5 lakh metric tonnes, spanning over 1.78 million hectares of cultivated land. Kerala is the leading coconut product state in India which is accounted for 45% of the nation’s total production.

Lately, theIndian markets have witnessed a significant surge in coconut demand. Organic virgin coconut oil, in particular, has managed to register massive demand from the USA and European nations. Last year our country has managed to export nearly 500 tonnes of coconut while current year this figure might end up two-fold. The raw coconuts and coconut virgin oilreceive consistent demand throughout the years which further boost the coconut oil manufacturing business. Last year our country reaps around Rs 200 crores against the sale of raw coconuts.

Read our article:FSSAI Guidelines on Fortification of Edible Oil with Vitamin A, D

According to the Food Safety and Standards Authority of India, no food business operator is allowed to carry out their business operation without an FSSAI registration. The FSS Act, 2006 has specified this condition for all FBOs involved in the supply chain of food. Apart from manufacturers, the said act covers distributors, packagers, and marketers as well.

Albeit getting an FSSAI license seems like a burden inthe first place, but it is the only way to stay in compliance with underlying norms regarding food safety. Consistent and prolong commitment toward FSSAI’s norms can help FBOs to build goodwill and promote growth.

FSSAI license for Coconut oil manufacturers is an absolute mandate in India. If they opt to go against this requirement then penalties would be levied accordingly as per FSS Act, 2006. Therefore, it is advisable to maintain harmony with FSSAI norms no matter how adverse the conditions are. The interested applicants can hop onto CorpBiz’s helpdesk and get the best possible assistance regarding the application process.

If you are someone who is more prone to mistake then go ahead and avail the services from the CorpBiz’s helpdesk. Our experts will help you prevent making mistakes during documentation and filing procedure.

Read our article:Guidelines of FSSAI to Stock Mustard Oil without Mixing other Oil

To keep pace with the speedily growing world, the health of an individual is of utmost importance. It has been righ...

A Viable Approach to Set-up Fo...