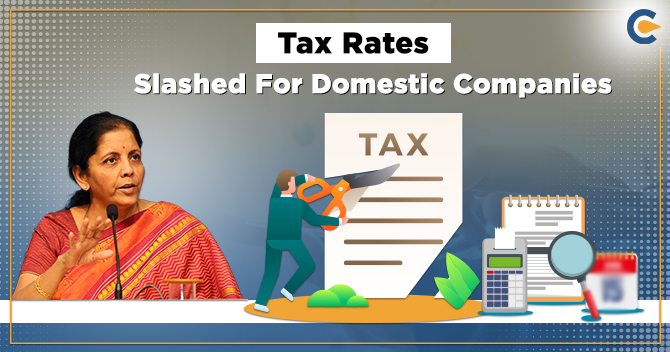 A Corporate Tax rate is the direct tax which is levied on the net income earned and the profit that corporate enterprises make from doing businesses. The tax is imposed at a specific rate in accordance with the provisions of Income Tax Act, 1961[1].

Recently, the Finance Minister has made significant cuts to India’s corporate tax rates to boast the economy during the pandemic. Such as for new manufacturing companies set up from 1st October 2019 and operational before the time periods of 31st March 2023, the existing tax rate is 25% which has been brought down to 15% (plus surcharge & cess).

What are the Two Sections inserted in the Income Tax Act?

According to the Taxation Laws (Amendment) Act, there are two inserted sections to the Income Tax Act which are Section 115BAA and Section 115BAB. Those are as follows:-

The corporate tax rate reduced to 22% for all the domestic companies. As of fiscal year 2019-20, all the domestic companies can choose to be taxed at a rate of 22% (including surcharge and cess), provided that they will not avail of specified exemptions or incentives. Additionally 10% surcharge tax will be levied. Accordingly, an effective tax rate for companies opting to pay tax under Section 115BAA of the Income Tax Act will be 25.168%.

All Domestic companies who avail for this reduced corporate tax rate must not have to pay minimum alternate tax (MAT) under Section 115JB, currently charged at 18.5% of a book profits. An amendment Act clarifies that companies that do not wish to avail of this concessional rate immediately can choose to do so once applicable exemptions or incentives have expired. However, once the company opts to be governed by Section 115BAA, it cannot subsequently opt out.

The rate underlining corporate tax in India differs from one type of company to other i.e. foreign corporations and domestic corporations to pay tax at different rates. Also, it depends on the type of corporate entity & the different revenues earned by each of them; the corporation tax rate varies on the basis of each and every slab rate system.


Read our article:Let’s Understand the Concept of Professional Tax in Tamil Nadu

Transactions among related persons and other activities of the ‘GST Schedule I’ will be treated as Supply even...

Farmer Bill, 2020 left most of the farmers in a perplexing situation. Although the bill seems to be quite remarkabl...